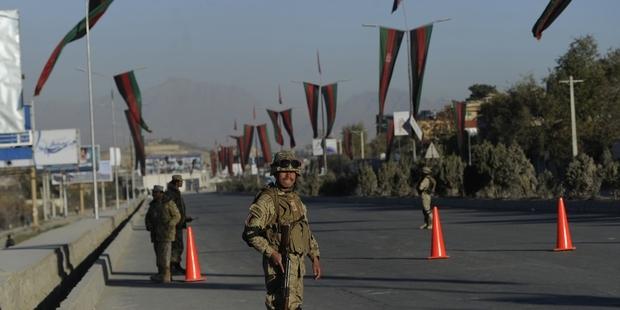 Afghan policemen stand guard near the premises where the forthcoming Loya Jirga will be held in Kabul.(C) MASSOUD HOSSAINI/AFP/Getty Images

Afghan leaders meeting in Kabul this week should demand accountability for war crimes allegedly committed by US military forces in the country, said Amnesty International.

A Loya Jirga--or national consultative assembly--starting on 21 November will debate a proposed bilateral security agreement (BSA) with the USA. If signed by both governments, the BSA will set the terms of any continuing US military presence in Afghanistan after the end of 2014. The USA is expected to maintain more than 10,000 forces as well as civilian contractors and CIA operatives in the country.

"Right now, the lack of transparency means that family members of the hundreds of Afghan civilians killed in night raids and airstrikes by US forces lack any information about the progress of US military investigations, or even about whether investigations are being conducted. This is especially worrying, since in some cases the alleged abuses could amount to war crimes."

The Afghan leaders taking part in the Loya Jirga should insist that the proposed BSA provide for the protection of civilians in accordance with international law.

“Loya Jirga participants should require the Afghan government to report regularly to parliament about steps the US authorities have taken to investigate alleged war crimes, bring suspected perpetrators to justice and provide reparations to victims and survivors,” said Horia Mosadiq.

"Despite the widespread allegations of violations of international humanitarian law by US troops in Afghanistan, the US authorities have only brought a handful of cases to trial."

Every case involving civilian deaths should be investigated to assess whether or not the laws of war have been breached. Family members of the deceased should be kept informed of the results of such investigations, a practice that is not currently enforced in Afghanistan.

"Afghanistan's inability to try cases of alleged war crimes should not be taken as a ‘get out of jail free' card for anyone who may be responsible for such abuses in wartime," said Horia Mosadiq.

To avoid a legacy of unresolved cases of war crimes and other violations, Afghan and US governments have a responsibility to ensure Afghanistan has a fully functioning justice system that implements international fair trial standards and can handle such cases, Amnesty International said.

Afghan President Hamid Karzai called for this week’s consultative assembly, which will bring together some 3,000 political and tribal leaders from around the country, including members of parliament and other government bodies. Karzai, many other leaders and ordinary Afghans have long expressed outrage over incidents of civilian casualties in Afghanistan, and over the perceived failure of US justice mechanisms in ensuring accountability for unlawful killings of civilians.

Over the past 12 years in Afghanistan, Amnesty International has repeatedly raised concerns about alleged violations of international humanitarian law--including unlawful killings and torture--committed by all parties to the conflict.   Public Document