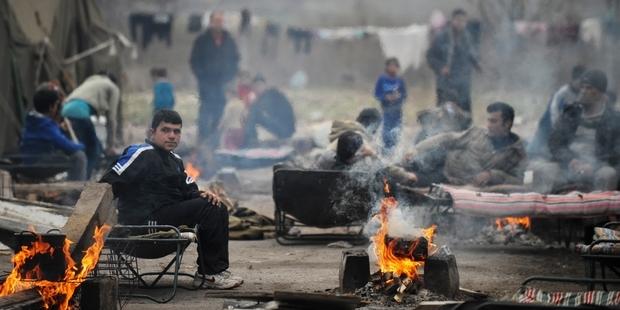 A refugee camp in the town of Harmanli, south-east of the Bulgarian capital Sofia.(C) NIKOLAY DOYCHINOV/AFP/Getty Images

The Bulgarian authorities must do more to prevent xenophobic hate crimes, Amnesty International urged today amid a rise in racist attacks that has left migrants living in fear.

In the most recent attacks this weekend a Malian teenager was attacked close to a mosque in the capital Sofia, while a Bulgarian man of Turkish origin was left in a coma hospitalized after being beaten up by skinheads.

"There is an alarming and dangerous rise in xenophobic feeling in Bulgaria and the onus is on the authorities to prevent it, but instead many recent government statements risk inflaming the situation," said Barbora Cernusakova of Amnesty International, who will discuss the issue with Bulgarian government officials in Sofia tomorrow.

"Migrants and refugees in Bulgaria are living in a climate of fear and all attacks against these vulnerable groups must be urgently and thoroughly investigated."

There has been a dramatic increase in the number of refugees, asylum-seekers and migrants coming into Bulgaria this year, mainly from Syria, prompting several anti-immigrant protests organized by far-right groups.

Xenophobic rhetoric has also entered mainstream politics, with Interior Minister Tsvetlin Yovchev saying last month: "There is no country that has ever benefitted from the fact that there are refugees on its territory."

Recent xenophobic attacks include the stabbings of an 18-year-old Malian boy on Sunday and a 17-year-old Syrian national last week.

On 9 November, Menin, a 28-year-old Bulgarian man of Turkish descent, was beaten up after being mistaken for an immigrant. His wife Minka told Amnesty International the family are now too scared to remain in the hostel where they live.

"My daughter and I found him after he had been beaten. He was laying on the ground covered in blood. I recognized him by his bag," she said.

Minka said the attack was sparked by the stabbing of a 20-year-old Bulgarian woman in Sofia last week, over which an Algerian suspect has been arrested.

Defence Minister Angel Naydenov has pledged to take "very serious measures in the direction of a clampdown" at the country's southern border with Greece and Turkey.

"Rather than taking action against migrants, many of whom have legitimate claims to asylum, the Bulgarian authorities should ensure that asylum-seekers, refugees and migrants feel welcomed and do not fear living in Bulgaria," said Cernusakova.