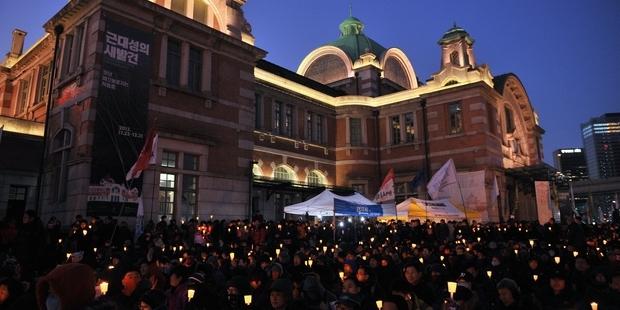 Thousands of South Korean rail workers have been on strike in recent weeks.(C)WOOHAE CHO/AFP/Getty Images

The South Korean authorities must rein in the police and respect the rights of striking workers, Amnesty International said after a massive police raid on the offices of the Korean Confederation of Trade Unions (KCTU) in Seoul on Sunday.

“The South Korean authorities must stop unlawful police raids and arrests of trade unionists, and respect the rights of striking workers.”

Some 130 trade unionists were arrested on Sunday when thousands of police raided the headquarters of the KCTU, in response to a strike by railway workers over fears that large-scale layoffs may be looming. Several workers were injured when police used pepper spray.

The police raid, which was carried out without a search warrant, was the first on the KCTU’s headquarters since it was given legal status in 1999.

The strike began on 9 December in protest at a decision by Korea Railroad (KORAIL) to set up a separate company to run a new bullet train line. The Korean Railway Workers Union (KRWU) – which is part of the KCTU – fears the move would lead to a privatization of KORAIL and large-scale layoffs.

KORAIL subsequently suspended 7,927 workers participating in the strike as a disciplinary action. Warrants for arrests of 28 union officers were issued based on criminal charges of ‘obstruction of businesses’ and two union leaders were arrested. KORAIL has also filed a lawsuit worth 7.7 billion won (about USD 7.25 million) in damages against the KRWU and its 186 leaders. These developments are in direct contravention of internationally recognized labour standards.

“This is a blatant attempt by the Korean authorities to deny the rights of striking workers and to cripple the legitimate work of the trade union. It is a clear breach of international standards,” said Polly Truscott.

Amnesty International cautioned the South Korean authorities that, even if police intervention becomes necessary because strikers’ actions present a substantial risk of violence to persons or serious damage to property, the police must comply with international standards. These include the UN Code of Conduct for Law Enforcement Officials, which underlines that the use of force should be exceptional and states that law enforcement officials may use force only when strictly necessary and to the extent required for the performance of their duty.

Amnesty International is concerned that the current dispute may result in a repeat of the abuses of workers’ rights that occurred during a previous rail workers’ strike in 2009, which were harshly criticized by the International Labour Organization Committee on Freedom of Association (ILO CFA) in November 2012.

In that strike, close to 200 union officers were dismissed, and 15,000 members were subject to disciplinary sanction. The ILO CFA called for the “immediate dropping of criminal charges (both fines and prison sentences) brought under Section 314 of the Penal Code (‘obstruction of business’) against union officials and members” of the KRWU who had participated in the strike, “the immediate reinstatement” of dismissed KRWU members and the lifting of all related disciplinary measures.

To date, the government has failed to implement the ILO’s recommendations in that case.