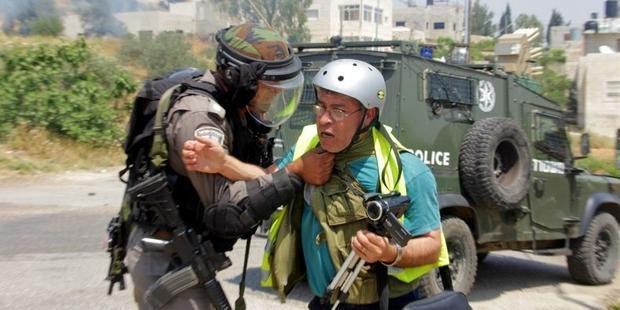 Bilal Tamimi being attacked by an Israeli soldier at a protest in Nabi Saleh in May 2013. (C) Tamimi Press

Israel’s security forces have displayed a callous disregard for human life by killing scores of Palestinian civilians, including children, in the occupied West Bank over the past three years with near total impunity, said Amnesty International in a report published today.

The report, Trigger-happy: Israel’s use of excessive force in the West Bank, describes mounting bloodshed and human rights abuses in the Occupied Palestinian Territories (OPT) as a result of the Israeli forces’ use of unnecessary, arbitrary and brutal force against Palestinians since January 2011.

In all cases examined by Amnesty International, Palestinians killed by Israeli soldiers did not appear to be posing a direct and immediate threat to life. In some, there is evidence that they were victims of wilful killings, which would amount to war crimes.

“The report presents a body of evidence that shows a harrowing pattern of unlawful killings and unwarranted injuries of Palestinian civilians by Israeli forces in the West Bank,” said Philip Luther, Director of the Middle East and North Africa Programme at Amnesty International.

“The frequency and persistence of arbitrary and abusive force against peaceful protesters in the West Bank by Israeli soldiers and policemen – and the impunity enjoyed by perpetrators – suggests that it is carried out as a matter of policy.”

Amnesty International has documented the killings of 22 Palestinian civilians in the West Bank last year, at least 14 of which were in the context of protests. Most were young adults under the age of 25. At least four were children.

According to UN figures, more West Bank Palestinians were killed by Israeli forces in 2013 than the total number killed in 2011 and 2012 combined.

Peaceful protesters, civilian bystanders, human rights activists and journalists are among those who have been killed or injured.

“The staggering numbers of wounded provide a sobering reminder of the relentless daily danger faced by Palestinians living in the occupied West Bank,” said Philip Luther.

Several victims were shot in the back suggesting that they were targeted as they tried to flee and posed no genuine threat to the lives of members of Israeli forces or others. In several cases, well-armoured Israeli forces have resorted to lethal means to crack down on stone-throwing protestors causing needless loss of life.

More than a year later, the findings of investigations by the Israeli authorities into a number of suspected unlawful killings have yet to be revealed.

“The current Israeli system has proved woefully inadequate. It is neither independent nor impartial and completely lacks transparency. The authorities must conduct prompt, thorough and independent investigations into all suspected instances of arbitrary and abusive use of force, especially when resulting in loss of life or serious injury,” said Philip Luther.
“A strong message must be sent to Israeli soldiers and policemen that abuses will not go unpunished. Unless those who commit violations are held to account unlawful killings and injuries are bound to continue.”

In recent years, the West Bank has seen continuing protests against the prolonged Israeli occupation and a litany of related repressive policies and practices. These include the ever-expanding unlawful Israeli settlements, the 800km-long fence/wall, forcible house demolitions, forced evictions, Israeli military checkpoints, roads reserved for use by Israeli settlers from which Palestinians are excluded and other restrictions on the movement of Palestinians in the OPT.

Protests are also held against the detention of thousands of Palestinians and in response to Israeli military strikes in Gaza and the killing or injury of Palestinians in protests or during arrest raids.

Amnesty International is calling on the Israeli authorities to instruct their forces to refrain from lethal force, including the use of live fire and rubber-coated bullets, except when strictly necessary to protect lives. They must also respect the right of Palestinians to peaceful assembly.

It urges the USA, the European Union and the rest of the international community to suspend all transfers of munitions, weapons and other equipment to Israel.

“Without pressure from the international community the situation is unlikely to change any time soon,” said Philip Luther.

“Too much civilian blood has been spilled. This long-standing pattern of abuse must be broken. If the Israeli authorities wish to prove to the world they are committed to democratic principles and international human rights standards, unlawful killings and unnecessary use of force must stop now.”

In the West Bank, the tragic consequences of Israel’s policy of supressing Palestinian protest have become a familiar story.

Samir Awad, a 16-year-old boy from Bodrus, near Ramallah, was shot dead near his school in January 2013 while attempting to stage a protest with friends against Israel’s 800km-long fence/wall, which cuts through their village. Three bullets struck him in the back of the head, the leg, and shoulder as he fled Israeli soldiers who ambushed his group. Witnesses said the boy was directly targeted as he ran away.

“They shot him first in the leg, yet he managed to run away… how far can an injured child run? They could have easily arrested him… instead they shot him in the back with live ammunition.”

Amnesty International believes Samir’s killing may amount to extrajudicial execution or a wilful killing, which is considered a war crime under international law.

“It’s hard to believe that an unarmed child could be perceived as posing imminent danger to a well-equipped soldier. Israeli forces appear in this and other cases to have recklessly fired bullets at the slightest appearance of a threat,” said Philip Luther.

Under international law, the police and soldiers enforcing the law must always exercise restraint and never use arbitrary force. Security forces may only resort to the use of lethal force if there is an imminent risk to their lives or the lives of others. Israel has repeatedly refused to make public the rules and regulations governing the use of force by army and police in the OPT.

Israeli soldiers have a long history of using excessive force against Palestinian demonstrators in the West Bank extending back to at least the first Intifada in 1987.