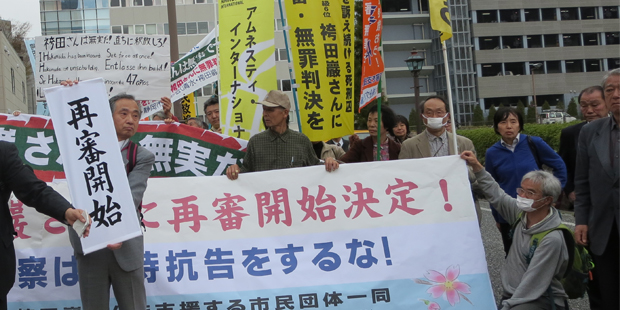 The Japanese courts have at last seen sense and granted a retrial to a prisoner who has spent over four decades on death row, said Amnesty International. The organization is now urging prosecutors to accept the court's decision.

Hakamada Iwao, 78, was sentenced to death in 1968 and is believed to be the longest-serving death row inmate in the world. After an unfair trial, he was convicted of the murder of his boss, his boss’s wife and their two children.

Shizuoka District Court granted his latest request for a retrial at a hearing earlier today. Prosecutors have four days to appeal the court’s decision.

“It would be most callous and unfair of prosecutors to appeal the court’s decision. Time is running out for Hakamada to receive the fair trial he was denied more than four decades ago,” said Roseann Rife, East Asia Research Director at Amnesty International.

“If ever there was a case that merits a retrial, this is it.  Hakamada was convicted on the basis of a forced confession and there remain unanswered questions over recent DNA evidence.”

Hakamada “confessed” after 20 days of interrogation by police. He retracted the confession during the trial and told the court that police had beaten and threatened him.

According to his lawyers, recent forensic tests show no match between Hakamada’s DNA and samples taken from clothing the prosecution alleges was worn by the murderer.

One of the three judges who convicted Hakamada has publicly stated he believes him to be innocent.

“The Japanese authorities should be ashamed of the barbaric treatment Hakamada has received. For more than 45 years he has lived under the constant fear of execution, never knowing from one day to the next if he is going to be put to death. This adds psychological torture to an already cruel and inhumane punishment,” added Roseann Rife.

Like most prisoners facing execution, Hakamada has mainly been held in solitary confinement. His mental health has deteriorated as a result of the decades he has spent in isolation.

Amnesty International has called on the Japanese government to introduce a moratorium on executions as a first step towards abolition of the death penalty.

The Japanese justice system continues to rely heavily on confessions often obtained through torture or other ill-treatment. There are no clear limits on the length of interrogations which lawyers are not permitted to attend.

Amnesty International has documented the routine use of beatings, intimidation, sleep deprivation and forcing detainees to stand or sit in a fixed position for long periods during interrogations.

The organization has repeatedly called for reforms of Japan’s justice system in line with international standards.

Amnesty International opposes the death penalty in all cases without exception regardless of the nature or circumstances of the crime, guilt, innocence or other characteristics of the individual or the method used by the state to carry out the execution. The death penalty violates the right to life and is the ultimate cruel, inhuman and degrading punishment.