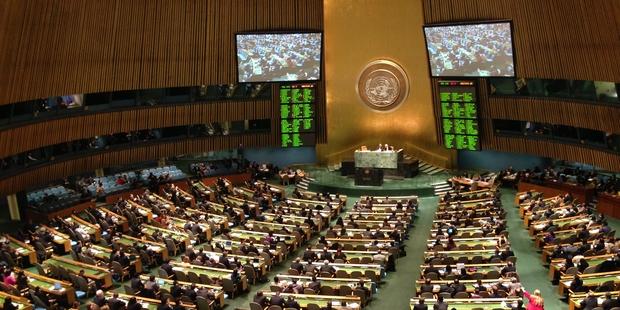 Out of 155 states that voted to adopt the ATT at the UN last year, 43 have yet to take any further action.(C) Amnesty International

Millions of people around the world will continue to suffer the deadly consequences of the poorly regulated global trade in weapons until many more governments take rapid steps to bring the Arms Trade Treaty (ATT) into force, Amnesty International warned.

On 2 April 2013, a total of 155 states voted in the UN General Assembly to adopt the ATT and 118 states have since signed the treaty, indicating their willingness to eventually bring it into their national law. But 43 of the states that supported the adoption of the treaty last year have yet to take any action whatsoever (see list below).

“Too many governments have been dragging their heels. The list of 43 absent signatures is mostly made up of countries where armed conflicts, violent repression and gun violence are more frequent, yet those states have the most to gain from the treaty. This is a major failure of political leadership,” said Brian Wood, Head of Arms Control and Human Rights at Amnesty International.

Although 17 of the European Union’s 28 member states will ratify the treaty at the UN on 2 April 2014, the total will still fall far short of the 50 ratifications needed for the treaty to enter into force. Up to now, only 13 states worldwide have ratified the ATT.

The ATT has a number of rules intended to enhance human rights protection for hundreds of millions of people whose lives and livelihoods are threatened by the proliferation and abuse of conventional arms.

If implemented effectively and robustly, the ATT will stop the flow of weapons to countries when it is known they would be used to commit or facilitate genocide, crimes against humanity or war crimes. Implementing the ATT strictly will also require states to assess the risk of transferring arms to another country: states have agreed the transfer will not go forward where there is an overriding risk the weapons could be used to commit or facilitate serious violations of international humanitarian or human rights law.

Several countries – Spain, Belgium, Germany, Mexico, Norway, Serbia, Iceland, Costa Rica, Antigua and Barbuda, and Trinidad and Tobago – have declared they will implement the treaty’s human rights provisions even before it enters into force.

However, Amnesty International is concerned that some states, including EU members, appear to be continuing arms transfers to countries where there is a clear risk they will be used for serious human rights violations and abuses.

Amnesty International will continue to campaign for all states to sign, ratify and rigorously implement the ATT. For the treaty to usher in a truly global regime to limit arms, the major arms producers who remain skeptical, like Canada, Israel and the USA, and arms importers such as Pakistan and Ukraine, will have to ratify along with all of the 43 countries dragging their feet. These states were among the 155 that voted to adopt the treaty at the UN last year.

Major arms exporters China and Russia, who both abstained in last year’s vote, are expected by diplomats to sign the treaty once a large number of states have joined the ATT.