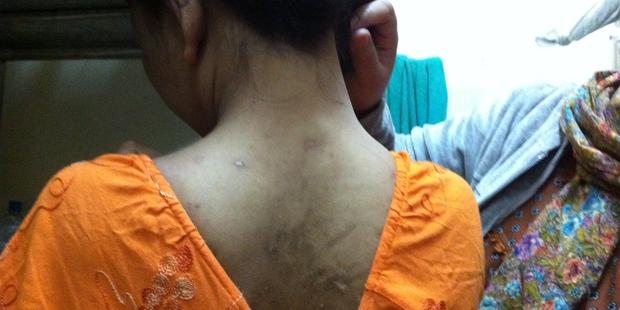 An Indonesian former domestic worker shows marks on her body that she said were inflicted by her employer. (C)Amnesty International

“My sleep is my break”: Exploitation of domestic workers in Qatar paints a bleak picture of women who have been recruited to work in Qatar on the basis of false promises about salaries and working conditions, only to be made to work extreme hours and seven-day weeks. Some women described how they were subjected to appalling episodes of sexual and physical violence.

“Migrant domestic workers are victims of a discriminatory system that denies them basic protections and leaves them open to exploitation and abuse including forced labour and human trafficking," said Audrey Gaughran, Amnesty International’s Global Issues Director.

“We have spoken to women who have been terribly deceived, then found themselves trapped and at the mercy of abusive employers, banned from leaving the house. Some women said they were threatened with physical violence when they told their employers they wanted to leave.”

There are at least 84,000 women migrant domestic workers in the Gulf state, mainly from South and South East Asia. Many are forced to work excessive hours. Researchers interviewed women working, in some cases, up to 100 hours per week, with no day off.

Some said they had been promised good salaries and decent working conditions before leaving for Qatar, only to have their hopes shattered on arrival.

Under Qatari law there are no limits on working hours for domestic workers and there is no requirement to give them a day off. They are also unable to lodge complaints with the Labour Ministry.

“Women who find themselves in abusive households face utterly miserable conditions. They have few options - if they choose to simply to get out of the house, they will be branded ‘runaways’ and are likely to end up being detained and deported,” said Audrey Gaughran.

Domestic workers are subject to the restrictive sponsorship system, which prevents migrant workers from leaving their job or the country without their employer’s permission. While some women find good jobs and are treated well, women facing abuse are left with little choice but to “run away”, putting them at risk of being arrested, detained and deported on charges of “absconding”. Up to 95 per cent of the women held at Doha’s deportation centre in March 2013 were domestic workers.

An Indonesian woman being held at the deportation centre after fleeing from sustained physical abuse, showed researchers a deep scar on her chest where her female employer had branded her with a hot iron. She told researchers she had been forced to work seven days a week, was not paid for months and was banned from leaving the house. She eventually managed to leave the house, only to be picked up by police and detained.

Researchers heard shocking testimonies of violent abuse, including women who reported being slapped, pulled by the hair, poked in the eyes, and kicked down the stairs by their employers. Three women reported that they had been raped.

Women who have been physically or sexually abused face major obstacles to getting justice. None of the women researchers spoke to had seen their attackers prosecuted or convicted.

In one horrific case, a domestic worker broke both her legs and fractured her spine when she fell from a window as she tried to escape a rape attack by her employer. Her attacker then proceeded to sexually assault her as she lay on the ground, injured and unable to move. Only afterwards did he call an ambulance.

When researchers interviewed her six months after the attack, she was still using a wheelchair. Despite her appalling injuries, the Public Prosecutor dismissed the case due to “lack of evidence” and she returned to the Philippines last year. Her employer has never been held accountable.

Women who report sexual abuse also risk being charged with “illicit relations” – sexual relations outside of marriage – a “crime” normally punished with a year in jail and deportation. Approximately 70 per cent of the women held at Doha’s women’s prison in March 2013 were domestic workers. Pregnant women were among those imprisoned, and 13 babies under two years old were being detained with their mothers.

The charge of ‘illicit relations’ should be removed from Qatar’s laws without delay, Amnesty International said.

Amnesty International called on the Qatari authorities to urgently remove provisions in the Labour Law which deny labour rights to domestic and some other workers. In recent years, the government has repeatedly stated that it will introduce a domestic workers law.

“International attention on the 2022 FIFA World Cup has thrown a spotlight on the plight of migrant construction workers in Qatar. However, the complete absence of protections for domestic workers’ labour rights, and the fact that they are isolated in employers’ homes, leaves them exposed to abuse to an even greater extent,” said Audrey Gaughran.
“Promises by the government to protect domestic workers’ labour rights have so far not amounted to anything. Qatar must stop dragging its feet over this and guarantee domestic workers legal protection for basic rights immediately.”