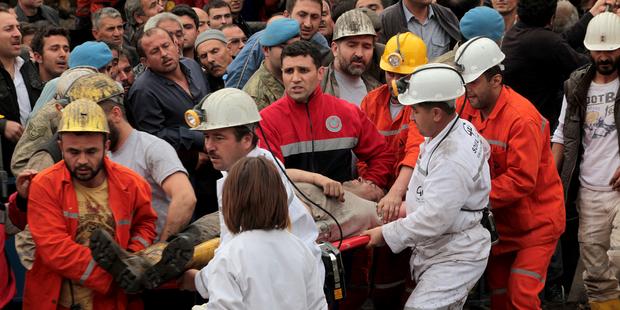 Some 245 men are reported to have died with 80 injured after an explosion at a coal mine in Soma, west Turkey.(C)Ahmet Sik/Getty Images

The Turkish government must urgently investigate last night’s catastrophic coal mine explosion and reports of dangerous working practices in the mining sector to stop further tragedies.

This was a tragedy that should have been avoided. The long history of deaths in mines in Turkey raises chilling questions over workers’ safety. The fact that the government rejected recent calls by parliamentarians to investigate serious work-related accidents is nothing short of shocking. They are playing with people’s lives.

Some 245 men are reported to have died with 80 injured after an explosion at a coal mine in Soma, west Turkey, on Tuesday 13 May. The death toll is expected to rise significantly as 800 workers were on site as the explosion occurred.

The mine is owned by Soma Kömür Ýþletmeleri A.Þ, a subsidiary of Soma Holding, the largest underground coal producer in Turkey.

Previous mine disasters in Turkey include an explosion, in 1992, at a coal mine in the black sea province of Zonguldak in which 263 miners died.

Last year, a parliamentarian from the opposition Republican People’s Party (CHP) submitted a motion to Parliament to investigate work-related accidents at coal mines in Soma. The proposal was supported by all of the three opposition parties. However, the ruling Justice and Development Party (AKP) voted against the motion and it was rejected two weeks ago.

The Turkish authorities must launch an immediate investigation into the causes of the explosion. Remedies must be made available to the survivors and the victims’ relatives. Soma Holding must fully cooperate with the process and the results of the investigation must be made public.