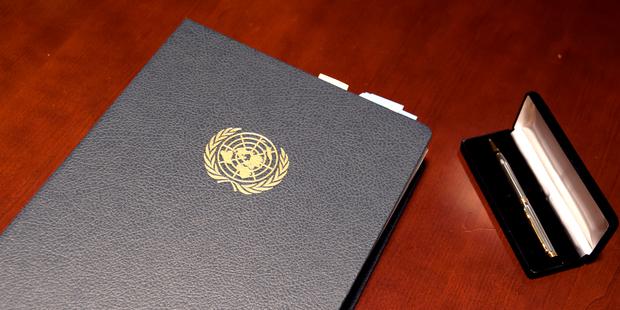 The Arms Trade Treaty opened for signature at the UN on 3 June 2013.(C) Amnesty International

Rapid progress has been made in the year since the global Arms Trade Treaty (ATT) opened for signature at the United Nations in New York, and a surge of further ratifications will soon activate the treaty this year, helping to save millions of lives and protect human rights, Amnesty International said as it marks the anniversary of the treaty signing on 3 June.

The historic treaty has now been signed by 118 states and will become legally binding international law shortly after 50 countries ratify. Thirty-two states have already done so and at least 10 more ratifications are expected on 3 June.

Remarkable progress to bring the Arms Trade Treaty into force has been made in the past year, reflecting a strong desire of many states to tackle the irresponsible international arms trade. Strict implementation of this treaty will save millions of lives and reduce the risk of serious human rights abuses.

At least 500,000 people die every year on average as a result of armed violence and conflict, and millions more are displaced and abused.

Referring to the 155 states which voted to adopt the ATT at the UN General Assembly in April last year, Amnesty International appealed to their political leaders to stop dragging their heels and sign and ratify the treaty without delay. A majority of those states have already signed or ratified, but 43 of them – mostly from Asia, Africa and the Middle East – have yet to take any action at all.

The organization is also reminding states that they do not need to wait until the ATT’s entry into force to begin observing the treaty’s human rights provisions. Several countries – Spain, Belgium, Germany, Mexico, Norway, Serbia, Iceland, Costa Rica, Antigua and Barbuda, and Trinidad and Tobago – have already declared they will implement the treaty’s human rights provisions before it enters into force.

Amnesty International has campaigned since the early 1990s to achieve robust, legally binding, global rules on international arms transfers to stem the flow of conventional arms and munitions that fuel atrocities and abuse.

Once it enters into force, the ATT will prohibit states from transferring conventional weapons and munitions to countries when they know those arms would be used to commit or facilitate serious human rights abuses, including genocide, crimes against humanity or war crimes. All states parties will have to carry out objective assessments to avoid an overriding risk that an arms export would be used for serious human rights violations.