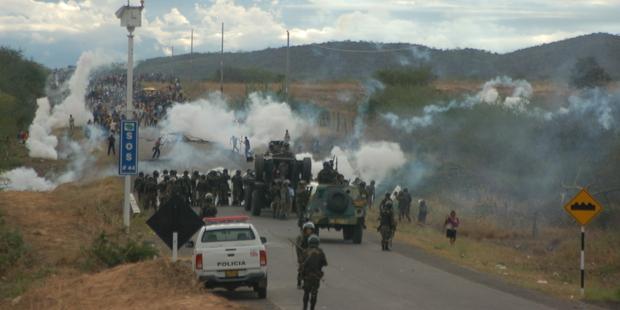 Police used tear gas against protesters during the clashes in 2009 that left 33 dead.(C)Thomas Quirynen

The Peruvian authorities must ensure that all those suspected of criminal responsibility in the tragic events in Bagua are brought to justice, said Amnesty International today on the fifth anniversary of the violence which left 33 people dead.

Demonstrators and police were killed when police clashed with Indigenous People protesting against a series of laws allowing for the exploitation of natural resources on ancestral land in 2009.

During the violence 23 officers lost their lives along with 10 civilians. Hundreds more were injured. So far only protesters have been brought to trial.

“If the Peruvian authorities are truly committed to bringing to justice those suspected of criminal responsibility for these deaths, it is not enough to punish the protesters and ignore possible abuses by the police,” said Guadalupe Marengo, Amnesty International’s Americas Deputy Programme Director.

Violence broke out on 5 June 2009 when police moved in to break up a roadblock on a stretch of road known as the Curva del Diablo near Bagua in the Amazonas department, Peru.

In the ensuing clash 12 police officers were killed along with five local townspeople and five Indigenous People. Another police officer is presumed dead as his whereabouts remain unknown.

A further 200 people were injured in the violence, 80 of whom had been shot.

The following day 11 more police officers were killed while they were held hostage by Indigenous protesters at a Petroperú Pumping Station near the town of Imacita, in Bagua province.

The trial of 53 people, the majority from the Awajun and Wampís communities, for their alleged responsibility for acts of violence and the killing of the 12 police officers on the first day of violence, started on 14 May this year.

The protesters on trial face possible sentences ranging from six years to life imprisonment. However, human rights lawyers have signalled that there is no strong evidence to link any of the accused to the crimes they are being prosecuted for.

“Amnesty International will be watching the trial of these people closely. Those responsible for the tragic events in Bagua must be brought to justice, but above all the trial process must be fair. If the prosecutorial authorities cannot produce solid and admissible evidence against those accused then they must be freed, otherwise justice will not be done,” said Guadalupe Marengo.

“The authorities must learn from the lessons of Bagua. Until the government fulfils its duty to respect the rights of Indigenous People the risk of repeating the tragic events of what happened in Bagua remains.”

Amnesty International is calling for the government to uphold the rights of Indigenous People to ancestral lands, their means of survival and the right to free prior and informed consent on all matters that affect them.