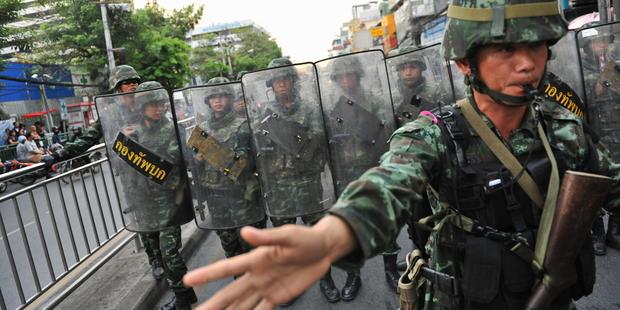 There appears to be no end in sight to violations of a range of human rights one month after martial law was declared in Thailand, Amnesty International warned today.

Since the military declared martial law on 20 May 2014, the rights to freedom of expression and peaceful assembly have been harshly restricted and extended powers of detention have resulted in some 511 individuals including political activists being arbitrarily detained, though most were held for a few days.

Thailand’s National Council for Peace and Order must ensure that the rights to freedom of expression and peaceful assembly are protected. They must stop arbitrary detentions and prosecutions of peaceful critics.

Arbitrary detention, denial of bail and prosecution are increasingly being used as measures to keep people from speaking out about the political situation. Hundreds of people – more than 90 per cent of whom are political allies or supporters of the former government, as well as academics and journalists – have been arbitrarily detained, after being ordered to report to authorities.

Failing to report to authorities is now a criminal offence, and those who have reported and been released are threatened with prosecution if they engage in activities perceived to be against the military takeover.

Authorities have charged critics for acts of peaceful dissent under security legislation and laws that severely restrict human rights, in violation of Thailand’s international legal obligations. Using social media to call for demonstrations, and even clicking “like” on certain Facebook posts may be treated as criminal offences.

“The raft of repressive measures in place in Thailand paints a grim picture of the state of human rights under martial law. The military authorities must immediately revoke these restrictions and stop detaining and prosecuting activists for peacefully exercising their human rights,” said Richard Bennett.

Amnesty International renews calls for authorities to make public the identity and whereabouts of all individuals held under martial law. The organization is calling for the immediate and unconditional release of all those detained solely for exercising peacefully their human rights to freedom of expression and assembly.