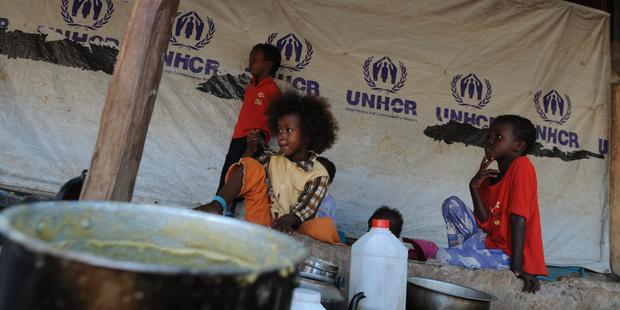 Authorities in Kenya are trying to force thousands of Somali refugees to live in squalid overcrowded camps.(C)SIMON MAINA/AFP/Getty Images.

The Somali refugees are appealing against a 30 June ruling made by High Court Judge Justice Majanja that stated that the relocation of refugees from urban centres is constitutional.

“This outrageous ruling affects the entire refugee population of Nairobi. Using the pretext of protecting national security, the Kenyan authorities have cracked down on refugees, effectively destroying any form of stability they may have managed to build after seeking refuge in Kenya,” said Michelle Kagari, Amnesty International’s Deputy Regional Director for Eastern Africa.

Thousands have been forcibly relocated to the camps, while hundreds of others have been expelled to Somalia. More than 300 children have been separated from their families as a result, people’s livelihoods have been disrupted and children are no longer going to school.

The Dadaab and Kakuma refugee camps were already overcrowded and insecure before over 5,000 people, mostly Somalis, were relocated there following Ole Lenku’s order. No provisions were made for the tens of thousands of people expected to follow. Food is scarce, access to education and health services are extremely strained, and there is little space for people to find shelter.

With tens of thousands of people flooding over the border from the raging conflict in South Sudan, people in the refugee camps are facing a looming humanitarian crisis, which is partly of the government’s making.

Hussein Mohamed Haji, Chairman of the Eastleigh Community Association,told Amnesty International that the decision to force the Somali community into the camps was a devastating blow:

“In 2006, we were welcomed in Kenya and given alien cards. We were told by immigration that the only thing we could not do in Kenya was to vote or be voted for. We opened banks, we started businesses and some of us bought property. How can we go to the camps, and how can we run our businesses if we are forced to the camps? We just don’t know what do to.”