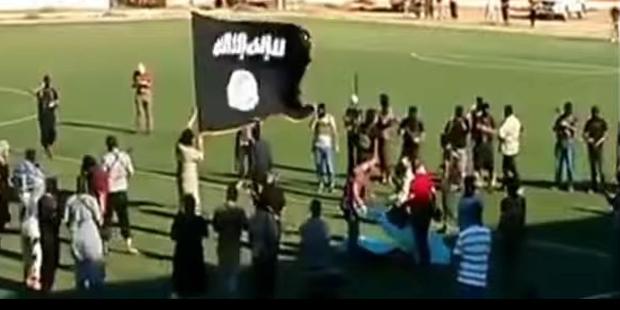 The video appears to show an execution-style killing organized by an armed group.(C)YouTube/Libyan Proud

A shocking video showing an execution-style killing by an armed group at a football stadium in eastern Libya highlights the authorities’ failure to prevent parts of the country from descending into violence and lawlessness, Amnesty International said today.

An amateur video published on social media sites shows the purported execution of an Egyptian man apparently organized by an armed group called the Shura Council of Islamic Youth in the eastern city of Derna.

“This unlawful killing realizes the greatest fears of ordinary Libyans, who in parts of the country find themselves caught between ruthless armed groups and a failed state,” said Hassiba Hadj Sahraoui, Amnesty International’s Middle East and North Africa Deputy Director.

“Such acts can only lead to further human rights abuses in Derna, where residents have no recourse to state institutions and therefore no means to seek justice or effective protection from abuses.

The video posted online shows the Egyptian victim, Mohamed Ahmed Mohamed, being brought blindfolded into the football ground in a pick-up truck. Masked men armed with rifles then force him to kneel on a stretcher.

A statement read out prior to the killing accuses him of stabbing to death a Libyan man, Khalid al-Dirsi. It is stated that he admitted to murder and theft during interrogation by the Legitimate Committee for Dispute Resolution, a body apparently operating under the authority of the Shura Council of Islamic Youth.

It is stated that the Committee ruled he is to be “executed” unless pardoned by the family of the victim.

An unmasked man wearing plain clothes, believed to be the brother of Khalid al-Dirsi, is seen shooting Mohamed Ahmed Mohamed from behind.

Photographs of the incident posted on social media show a large crowd of people watching the killing from the stadium’s benches.

Amnesty International has confirmed that the killing did take place on 19 August on the outskirts of the city.

The state has failed to assert its control of Derna since the end of Libya’s 2011 conflict.

There has been no police or army presence since then, while the Derna Court of Appeals has been suspended since June 2013 following the assassination of a senior judge, amid repeated threats to judges by armed groups.

The security vacuum was exploited by various armed groups.
Over the past two years security officials, politicians, religious figures and judges have been victims of targeted killings in Derna. These crimes have yet to be fully investigated.