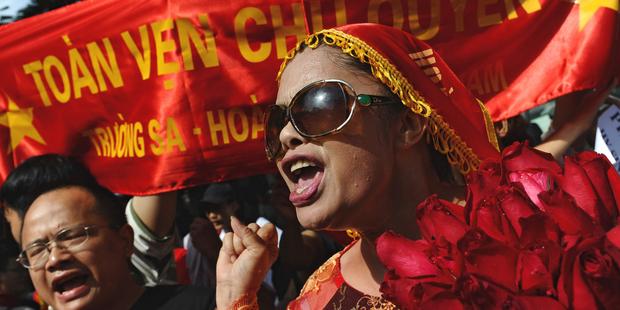 Bui Thi Minh Hang is a well-known activist who has taken part in anti-China protests.(C)AFP/Getty Images

The Vietnamese authorities must stop attacks on peaceful activists, Amnesty International said today after three human rights defenders were sentenced to jail and police beat and arrested their supporters.

Dozens of their supporters, including family members, bloggers and other civil society activists, were harassed, beaten and arrested to prevent them from attending the court hearing.

The three activists were attacked and arrested by police along with 18 others in February 2014 while trying to visit former prisoner of conscience Nguyen Bac Truyen at his fiance’s home.

“Viet Nam should rein in its police and stop attacks on peaceful activists, their families and supporters,” said Rupert Abbott.

“All those imprisoned solely for the peaceful exercise of their human rights should be immediately and unconditionally released.”

Bui Thi Minh Hang is a well-known activist who has taken part in anti-China protests and attended trials of other peaceful activists. She has been on hunger strike several times since her arrest and detention in February and is in poor health.

Nguyen Van Minh is a member of the non-state sanctioned branch of the Hoa Hao Buddhist church and an activist for religious freedom.