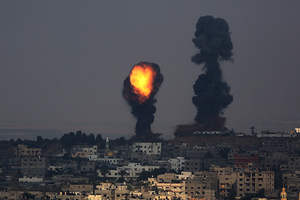 In 50 days of conflict, more than 2,100 Palestinians and 70 Israelis have been killed.(C)epa

The truce between Israel and the Palestinians has to built upon human rights.

We have seen, over and over again ceasefires dissipate in the dust of renewed bombings. Here are three basic human rights which must not be neglected if there is to be any hope for a just and sustainable peace.

The newly brokered truce between Israel and the Palestinians will be meaningless if it is not built solidly upon human rights, which must be at the heart of any attempt to stop the cycle of war crimes and other gross violations recurring incessantly. Without such a foundation, Palestinians and Israelis will continue to suffer.

The right to life

In 50 days of conflict, more than 2,100 Palestinians have been killed, most of them civilians. Nearly 500 of them were children. Many, perhaps most, of them were killed unlawfully, in attacks that violated international humanitarian law (the laws of war). Israel has levelled houses and bombed and shelled built up residential areas, apparently targeting militants, as though civilian lives and homes were irrelevant. At the same time, of the 70 killed on the Israeli side, six have been civilians, including one child. These civilians were killed by Palestinian armed groups firing indiscriminate rockets and other weapons into civilian areas, in violation of the laws of war.

If we want to understand this conflict we have to look at its background. For years Israel has imposed a blockade on Gaza, controlling the goods allowed to enter or leave the strip. After 2007 when Hamas gained control the Israeli blockade tightened to the point that it amounted to collective punishment. Enough has been allowed through for the Gazans to survive - but only just.

The 1.8 million Palestinians trapped in Gaza suffer shortages in fuel and electricity; at least a third are without clean water because Israel has blocked entry of sufficient fuel and the spare parts to repair damaged sewage works. Fishermen are restricted to a three-mile zone (widening it is one of the measures mentioned in the terms of the ceasefire) and there have been heavy restrictions on the import of raw materials and cement. There are also bans on the export of farming produce.

Israeli restrictions on movement have meant that even Palestinians needing urgent medical treatment outside the Gaza Strip have often been prevented from leaving. Some 80 percent of the population is now dependant on barely sufficient humanitarian aid. The blockade MUST be lifted and the passage of necessities and people allowed.

Justice for war crimes committed by both sides during the conflict

This is not only important for Gaza and Israel but also for the world. In this age of conflict, where the principle that civilians must be spared is at best callously disregarded and all too often deliberately flouted, we cannot allow the perpetrators of war crimes and crimes against humanity to go unpunished.

It is now the time to put human rights at the heart of any peacemaking process.

During the latest conflict Israel did not allow Amnesty International or Human Rights Watch into Gaza; let us see if delegations from international human rights organisations are allowed to enter now that a truce is underway.

In July, the UN Human Rights Council set up a Commission of Inquiry to investigate all violations of international humanitarian law and human rights law. The purpose of this commission's investigation is to end impunity and ensure that those responsible are brought to justice. The commissioners should have the resources of experts, including military ones, and be allowed to go everywhere and see everything.

If they had been implemented, the recommendations of the UN Fact-Finding Mission set up in the wake of the 2009 Gaza conflict might have prevented further unlawful killings and destruction in Gaza. When will international leaders learn sidelining human rights cannot bring about a just, sustainable peace?

Let the words of the Universal Declaration of Human Rights, adopted in 1948 after the horrors and genocide of the Second World War, still move us. In its preamble it said: "Disregard and contempt for human rights have resulted in barbarous acts which have outraged the conscience of mankind."

The whole system of international justice set up in the decades after World War II will become a dead letter if people's consciences are no longer outraged by the crimes committed in wartime as in peace. If violations of the laws of war are accepted by an international community which prefers to sweep the past under the carpet, in every war civilians will remain the first target and the next war in Gaza/Israel may well come soon and be even more deadly. It is now the time to put human rights at the heart of any peacemaking process.

Philip Luther is Director of the Middle East and North Africa Programme at Amnesty International.