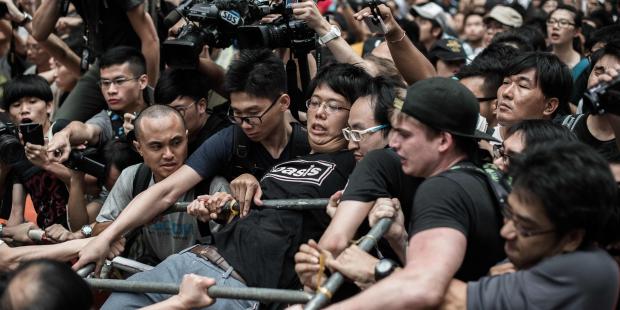 Women and girls were among those targeted, including incidents of sexual assault, harassment and intimidation, as counter-demonstrators clashed with pro-democracy protesters in the Mongkok and Causeway Bay areas of Hong Kong on Friday evening.

"The police inaction tonight is shameful. The authorities have failed in their duty to protect peaceful protesters who came under attack," said Mabel Au, Director of Amnesty International Hong Kong.

"There has been a heavy police presence during the past week, but their failure tonight risks fuelling an increasingly volatile situation."

Amnesty International has first-hand witness accounts of women being physically attacked and threatened, while police stood by and did nothing.

One woman at the demonstration in Mongkok told Amnesty International how a man grabbed her breasts while she was standing with other protesters at around 4pm. She also witnessed the same man assault two other women by touching their groins. Several police officers witnessed this but failed to take any action against the man. Fellow protesters then intervened to prevent the man attacking any more women.

Police reinforcements appeared only hours after the atmosphere became violent, but the police still struggled to maintain control.

It is unclear whether the police simply underestimated the risk posed by counter-demonstrators, or whether they decided not to intervene.

The authorities have an obligation to protect peaceful protesters from violent attacks. Demonstrators must be allowed to exercise their rights to freedom of expression and peaceful assembly.

Under international standards, a peaceful assembly does not become illegal because some counter-demonstrators act in an unruly or even violent way.

Since the late afternoon, the situation has become increasingly tense, and police seemed to have had difficulty maintaining control. Observers reported that police forces were not sufficient for several hours, despite widespread reports of an urgently deteriorating situation.

The police have made some arrests, but this seems to have made no affect on the counter-demonstrators.