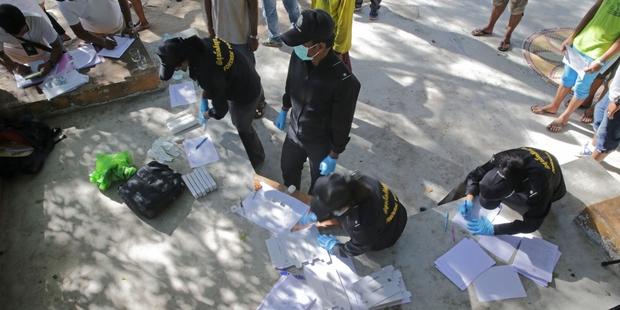 Thai police conduct DNA tests on Koh Tao during the investigation into the murders of Hannah Witheridge and Andrew Miller.(C) AFP/Getty Images

Thailand must ensure an independent and thorough investigation into mounting allegations of torture and other ill-treatment by police and respect fair trial rights during their probe into the murder of two British tourists on the island of Koh Tao, Amnesty International said today.

Following the arrest of two Myanmar nationals for the murders last month, a lawyer on the Myanmar Embassy’s legal team, who met the two, said that one of the men alleged police beat and threatened him with electrocution.

Numerous sources have reported further acts of torture and other cruel, inhuman and degrading treatment of other migrant workers from Myanmar arrested by police in connection with the investigation.

The pressure to be seen to be solving an appalling crime that has garnered considerable attention should not result in the violation of rights, including to a fair trial.

Tourists Witheridge, 23, and Miller, 24, were murdered in the early hours of September 15 on the tourist island of Koh Tao.

According to reports, police officers beat Myanmar migrant workers questioned in connection with the murders, threatened them and poured boiling water over them.

The mother of one of the individuals allegedly beaten reportedly said that Thai police had instructed those tortured or ill-treated not to speak to the media and threatened them.

Authorities have already made suspects take part in a public, televised enactment of the crime, which undermined their right to be presumed innocent.

“Authorities should provide protection from threats and acts of retaliation to anyone, regardless of their immigration status, reporting or speaking about torture or ill-treatment, and full redress to victims,” said Richard Bennett.

In May 2014, the UN Committee against Torture expressed serious concern about continuing allegations of widespread torture and other ill-treatment of detainees by Thailand’s military, police and prison officials. The Committee urged authorities to take immediate and effective measures to investigate, prosecute and punish perpetrators.