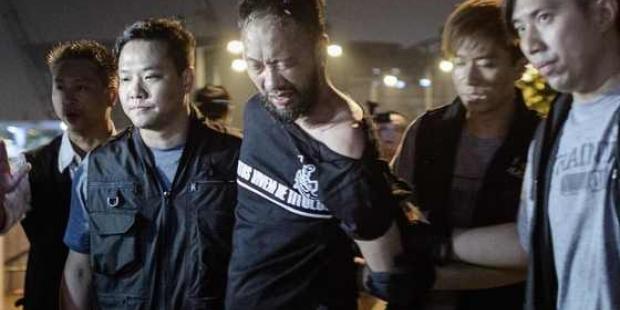 Pro-democracy protester, Ken Tsang is taken away by Hong Kong police shortly before he is attacked in the early hours of Wednesday.(C)PHILIPPE LOPEZ/AFP/Getty Images

Hong Kong police officers involved in the beating and kicking of a detained pro-democracy protester on Wednesday must face justice, Amnesty International said.

Local TV news footage shows social worker Ken Tsang Kin Chiu being taken away by six police officers in the early hours of Wednesday, his hands tied behind his back.  The police officers then appear to carry Tsang around a corner and put him on the ground. The publicly available video shows that some officers proceed repeatedly to kick and punch Tsang, who is seen curled-up in a ball, while other police officers stood by.

Amnesty International spoke to a lawyer assisting Tsang who confirmed the details of the attack, and that the victim was taken by police to a local hospital to receive medical treatment. Police have since said they will conduct an investigation into the incident.

“This appears to be a vicious attack against a detained man who posed no threat to the police. Any investigation into this incident must be carried out promptly and all individuals involved in unlawful acts must be prosecuted,” said Mabel Au, Director of Amnesty International Hong Kong.

“It is stomach-churning to think there are Hong Kong police officers that feel they are above the law.”

According to the lawyer, Tsang was initially arrested for assaulting a police officer. The charges against Tsang were then changed to unlawful assembly and obstructing police officers from carrying out their duties. He remains in police custody and will be interviewed after receiving medical treatment.

The incident occurred at around 3am on Wednesday morning as police attempted to remove pro-democracy protesters who had occupied a road just off the main protest site in downtown Hong Kong. Police used pepper-spray against scores of protesters. According to police 45 people were arrested.

“All those being held solely for exercising their rights to freedom of expression and assembly must be immediately and unconditionally released,” said Mabel Au.
“Amnesty International urges the Hong Kong police to show restraint and avoid any unlawful use of force.”

Police have stepped-up operations this week to remove barricades set up by pro-democracy protesters in an effort to reduce the areas occupied by demonstrators.