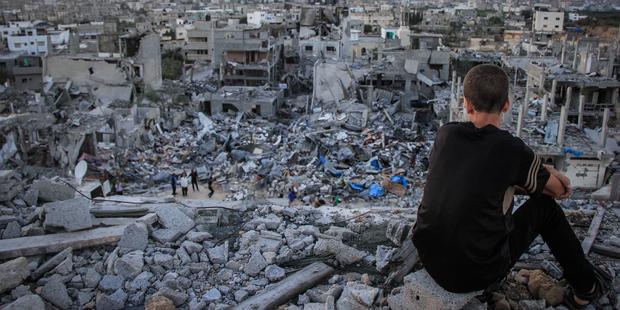 A Palestinian child sits above the ruins of his ruined home, and looks at thousands of homes destroyed because of the war on Gaza.(C)2014 Pacific Press

Israeli forces have killed scores of Palestinian civilians in attacks targeting houses full of families which in some cases have amounted to war crimes, Amnesty International has disclosed in a new report on the latest Israeli operation in the Gaza Strip.
Families under the Rubble: Israeli attacks on inhabited homes details eight cases where residential family homes in Gaza were attacked by Israeli forces without warning during Operation Protective Edge in July and August 2014, causing the deaths of at least 104 civilians including 62 children.  The report reveals a pattern of frequent Israeli attacks using large aerial bombs to level civilian homes, sometimes killing entire families.

“Israeli forces have brazenly flouted the laws of war by carrying out a series of attacks on civilian homes, displaying callous indifference to the carnage caused,” said Philip Luther, Director of the Middle East and North Africa Programme at Amnesty International.

“The report exposes a pattern of attacks on civilian homes by Israeli forces which have shown a shocking disregard for the lives of Palestinian civilians, who were given no warning and had no chance to flee.”

The report contains numerous accounts from survivors who describe the horror of frantically digging through the rubble and dust of their destroyed homes in search of the bodies of children and loved ones.

In several of the cases documented in the report, possible military targets were identified by Amnesty International. However the devastation to civilian lives and property caused in all cases was clearly disproportionate to the military advantages gained by launching the attacks.

“Even if a fighter had been present in one of these residential homes, it would not absolve Israel of its obligation to take every feasible precaution to protect the lives of civilians caught up in the fighting. The repeated, disproportionate attacks on homes indicate that Israel’s current military tactics are deeply flawed and fundamentally at odds with the principles of international humanitarian law,” said Philip Luther.

In the single deadliest attack documented in the report, 36 members of four families including 18 children were killed when the three-storey al-Dali building, was struck.  Israel has not announced why the building was targeted, but Amnesty International has identified possible military targets within the building.

The second deadliest attack appears to have targeted a member of the al-Qassam Brigades, Hamas’ armed wing, who was outside the Abu Jame’ family home. The house was completely levelled killing 25 civilians including 19 children. Regardless of the intended targets, both of these attacks constitute grossly disproportionate attacks and under international law, they should have been cancelled or postponed as soon as it was evident that so many civilians were present in the house.

Israeli officials have failed to give any justification for carrying out these attacks. In some of the cases in this report Amnesty International has not been able to identify any possible military target. In those cases it appears that the attacks directly and deliberately targeted civilians or civilian objects, which would constitute war crimes.

In all of the cases researched by Amnesty International no prior warning was given to residents of the homes which were attacked. If it had been given, excessive loss of civilian lives could clearly have been avoided.

“It is tragic to think that these civilian deaths could have been prevented. The onus is on Israeli officials to explain why they chose to deliberately flatten entire homes full of civilians, when they had a clear legal obligation to minimize harm to civilians and the means of doing so,” said Philip Luther.

The report highlights the catastrophic consequences of Israel’s attacks on homes, which have shattered the lives of entire families. Some of the homes attacked were overflowing with relatives who had fled other areas of Gaza in search of safety.

Survivors of an attack on the al-Hallaq family home described horrifying scenes of strewn body parts amid the dust and chaos after three missiles struck the house.
Khalil Abed Hassan Ammar, a doctor with the Palestinian Medical Council and a resident in the building said: “It was terrifying we couldn’t save anyone…. All of the kids were burnt, I couldn’t tell which were mine and which were the neighbours’…We carried whoever we were able to the ambulance… I only recognized Ibrahim my eldest child, when I saw the shoes he was wearing…I had bought them for him two days before.”

Ayman Haniyeh, one of the neighbours, described the trauma of trying to search for survivors:
“All I can remember are the bits and pieces I saw of bodies, teeth, head, arms, insides, everything scattered and spread,” he said. One survivor of the same attack described hugging a bag full of the “shreds” of her son’s body.

Israel has so far failed to even acknowledge any of the attacks detailed in the report and has not responded to Amnesty International’s requests for explanations of why each of these attacks took place.

At least 18,000 homes were destroyed or rendered uninhabitable during the conflict. More than 1,500 Palestinian civilians including 519 children were killed in Israeli attacks carried out during the latest Gaza conflict. Palestinian armed groups also committed war crimes, firing thousands of indiscriminate rockets into Israel killing six civilians including one child.

“What is crucial now is that there is accountability for any violations of international humanitarian law that have been committed. The Israeli authorities must provide answers. The international community must take urgent steps to end the perpetual cycle of serious violations and complete impunity,” said Philip Luther.

Given the failure of Israeli and Palestinian authorities to independently and impartially investigate allegations of war crimes, it is imperative that the international community support the involvement of the International Criminal Court (ICC).

Israel has continued to deny access to Gaza for international human rights organizations including Amnesty International and the organization has been forced to conduct its research for this report remotely, supported by two fieldworkers based in Gaza. Israel has also announced that it will not co-operate with the Commission of Inquiry established by the UN Human Rights Council.

“Failing to allow independent human rights monitors into Gaza smacks of a deliberately orchestrated attempt to cover up violations or hide from international scrutiny. Israel must cooperate fully with the UN Commission of Inquiry and grant international human rights organizations such as Amnesty International immediate access to Gaza to prove its commitment to human rights,” said Philip Luther.