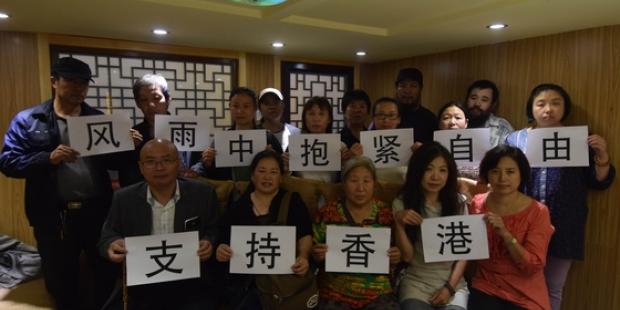 At least 76 people in mainland China remain in detention for supporting calls for genuine universal suffrage in Hong Kong, according to the latest information Amnesty International has been able to verify.

“The leaders should take this opportunity to speak out and urge President Xi to ensure all those detained solely for exercising their right to freedom of expression and peaceful assembly are immediately and unconditionally released.”

The past month has seen Chinese police detain people in connection with the pro-democracy protests, especially in Beijing, Jiangsu, and the southern cities of Guangzhou and Shenzhen, which are close to Hong Kong.

Individuals have been held for posting pictures online with messages of support, shaving their heads in solidarity, or for planning to travel to Hong Kong to participate in the protests. Scores of others have been called in for questioning by the authorities, known as being “invited for tea”.

Chinese state censors have attempted to ban photos and block any positive mentions online of the pro-democracy protests, while only allowing TV and newspapers to run government-approved news and commentary. The BBC website and the photo-sharing platform Instagram have been banned since last month.

Ahead of APEC, the authorities have also prevented several mainland activists from travelling to Beijing. Activists in the capital have also been forced to leave the city ahead of APEC, including prominent activists Hu Shigen and Xiang Li.

“The latest wave of detentions is part of a concerted attack on fundamental freedoms since President Xi took office. It makes a mockery of Xi’s recent claims that the rule of law and human rights will be fully respected in China by 2020,” said Roseann Rife.

The attack against freedom of expression, peaceful assembly and association in the past year has seen individuals associated with the activists’ network “New Citizens’ Movement” sentenced to between two and six and a half years’ imprisonment.

More than 60 activists were arbitrarily detained or put under house arrest in the run-up to the 25th anniversary in June of the violent crackdown in 1989 of pro-democracy protests in and around Tiananmen Square.

Meanwhile, student leaders in Hong Kong have said they plan to travel to Beijing during the APEC summit in an effort to meet with senior Chinese officials to stress their calls for electoral reform. Hundreds of pro-democracy protesters continue to occupy parts of downtown Hong Kong as part of the demonstrations which began on 26 September.