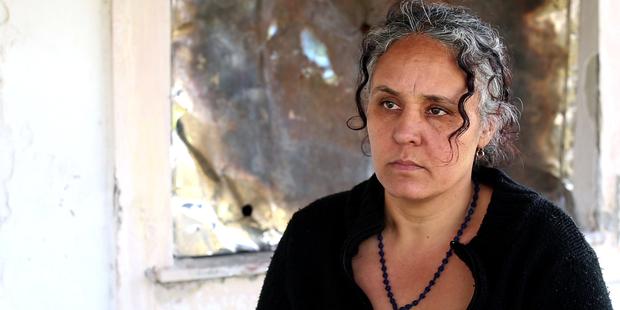 Paraskevi Kokoni and her nephew were punched, kicked and beaten with logs by a group of men.(C)Amnesty International

Today’s conviction of three men following a brutal racist attack on a Roma woman and her nephew is a “first step towards justice”, said Amnesty International and Greek Helsinki Monitor - the NGO that provided free legal representation to the victims.

A court in the town of Messolonghi today handed eight-month jail sentences – suspended for three years – to the three men over the attack on Paraskevi Kokoni and her nephew Kostas Theodoropoulos in October 2012.

“These convictions are only the first step to justice. Equally important is that the court now recognizes the racist motive behind this crime,” said Giorgos Kosmopoulos, Amnesty International’s expert on Greece, who observed the trial.

Paraskevi Kokoni and her nephew were punched, kicked and beaten with logs by a group of local men while they were out shopping in the town of Etoliko, western Greece.

Paraskevi told Amnesty International that she was singled out as a relative of a local Roma leader.

The attack took place amid a series of vicious racist raids on Roma families by groups chanting anti-Roma slogans and threats in the same town between August 2012 and January 2013.

In a separate case last month, those attacks were attributed to members and supporters of Golden Dawn in Etoliko.

The prosecutor in that case requested the indictment of the party’s MPs and various members for involvement in a criminal organization.

“This is a historic judgement as it is the first conviction in Greece for violence against Roma by members of Golden Dawn, particularly as it has been issued by a provincial court,” said Panayote Dimitras, the Greek Helsinki Monitor spokesperson.

It is not clear from the court’s verbal reasoning whether evidence of a racist motive was taken into account in sentencing the three individuals today for causing serious bodily harm. This will be revealed when the written judgement is released.

“The impact of this judgement for victims of hate crimes in Greece will be greatly reduced if the court – in its written judgment – does not acknowledge this racist attack for what it is,” said Giorgos Kosmopoulos.

Legal provisions aimed at combating hate crimes have been in place in Greece for several years. However, investigators frequently fail to examine possible racist motives and prosecutors rarely present such evidence in court.