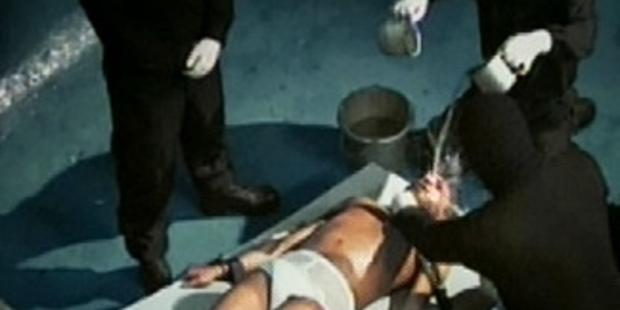 Simulation of waterboarding, one of the so-called "enhanced interrogation techniques" used by the USA.(C)Amnesty International

The USA should use its appearance before the UN Committee against Torture to commit itself to justice for the grave human rights violations—including torture and enforced disappearances—committed by US personnel in recent years, said Amnesty International.

This week in Geneva, the Committee against Torture will review the USA’s record under the UN Convention against Torture and Other Cruel, Inhuman or Degrading Treatment or Punishment (UNCAT).

“The USA proclaimed itself to be a global leader against torture even when torture and enforced disappearance were being authorized at the highest levels of government under the Bush administration. Today the USA asserts that it is committed to the principles of UNCAT even as it fails to bring those responsible for past torture to justice,” said Zeke Johnson, Director of Amnesty International USA's Individuals at Risk Program who will attend the hearing in Geneva.

Amnesty International has submitted evidence to the Committee on the US government’s failure to end impunity and lack of redress for human rights violations, including:

“The accountability gap is truly shocking. The lack of truth, remedy and accountability represents a serious affront to the rule of law and respect for human rights,” said Zeke Johnson.

Both the Bush and Obama administrations have succeeded in blocking judicial remedy for those who allege they were subjected to unlawful human rights violations.
When the USA ratified UNCAT, it filed a “reservation” stating that the USA would adhere to the ban on cruel, inhuman or degrading treatment only to the extent that it matched US domestic legal standards.
“This was one of the chickens that came home to roost,” said Zeke Johnson.
“Bush administration lawyers exploited this reservation as part of their flawed legal arguments in the infamous secret memos which approved interrogation techniques and detention conditions that violated UNCAT.”
“This 30th anniversary year of the Convention against Torture is surely a moment to redouble efforts to persuade the USA to meet its international obligations. It is high time the US government complied with all the provisions of the Convention, no strings attached.”
Amnesty International’s submission to the Committee makes further recommendations in relation to a number of other issues, including the question of accountability for past torture by Chicago police, the USA’s use of solitary confinement against thousands of prisoners around the country, the use of electro-shock weapons in policing, the death penalty, and life imprisonment without the possibility of parole for under 18-year-olds.
“The Obama administration has welcomed the country’s scrutiny by the UN Committee as an opportunity for the USA to engage in self-examination. That reflection must include ensuring that all those who authorized, carried out or otherwise participated in torture or enforced disappearances be brought to justice. The USA must not continue to allow those responsible to evade accountability,” said Zeke Johnson.