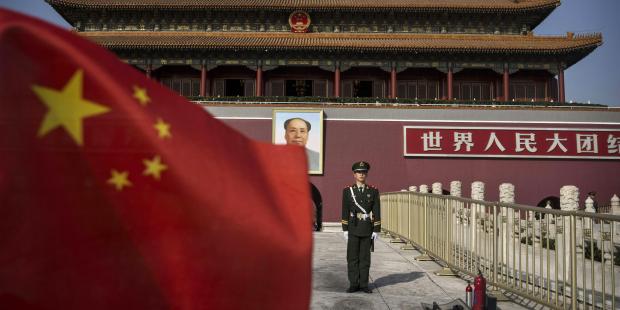 A Chinese soldier stands guard in front of Tiananmen Gate outside the Forbidden City on October 27, 2014 in Beijing, China(C)Kevin Frayer/Getty Images

The Chinese authorities appear to have intensified the crackdown against mainland activists for peacefully supporting the Hong Kong protests, Amnesty International said, following reports one faces the charge of “inciting subversion”.

Wang Mo, from the southern city of Guangzhou, was formally arrested on Monday according to his lawyer. He could face more than five years in prison if convicted.

Wang, a leading figure in the Southern Street activist movement, has been an active online campaigner and was recently pictured with three others holding a banner expressing support for the Hong Kong pro-democracy protests.

“Any harassment of activists for peacefully supporting Hong Kong protests is shameful but the serious charge of inciting subversion brought against Wang is an extremely alarming development,” said William Nee, China researcher at Amnesty International.

“The fear is that this could mark the start of a wave of similar charges against the scores of mainland supporters of the Hong Kong protests.”

More than 100 activists in mainland China have been detained since the start of the Hong Kong protests on 26 September 2014. At least 33 are still believed to be in detention.

Most, like Wang, were initially held on suspicion of the lesser charge “picking quarrels and provoking troubles”. Two of the other activists in the picture with Wang, Xie Wenfei and Sun Tao remain in detention while the third, Sun Liyong, was released earlier this month.

Individuals have been held for posting pictures online with messages of support, shaving their heads in solidarity, or for planning to travel to Hong Kong to participate in the protests. Scores of others have been called in for questioning by the authorities, euphemistically known as being “invited for tea”.

Chinese state censors have attempted to ban photos and block any positive mentions online of the pro-democracy protests, while only allowing TV and newspapers to run government-approved news and commentary. The BBC website and the photo-sharing platform Instagram have been banned since last month.