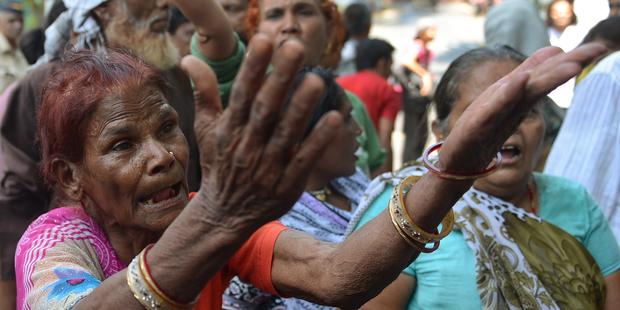 Survivors and activists have long criticized the Indian government for massively underestimating the number of dead and injured after the Bhopal gas leak.(C) PUNIT PARANJPE/AFP/Getty Images

India’s government has today agreed to increase a multi-million dollar compensation claim against Union Carbide over the 1984 gas leak from the company's pesticide plant that poisoned more than half a million people.

Today the five women, who have been on hunger strike since 10 November and were supported by another 200 survivors and activists, were called to a meeting with Minister of Chemicals and Fertilizers, Ananth Kumar.

He agreed, in writing, to revise figures the government was using in the compensation claim, and promised to do so before the thirtieth anniversary of the Bhopal disaster on 2 December. He also agreed to ensure that survivors who had never received compensation would now get the payments they are entitled to.

The government had claimed for 5,295 deaths, 4,902 cases of permanent disability and 42 cases of severe injury.

Activists have been calling for 22,917 deaths, 508,432 cases of permanent disability and 33,781 cases of severe injury to be included in the petition.

Survivors, activists and their international supporters, including Amnesty International, have long criticized the government for massively underestimating the number of dead and injured in a curative petition against Union Carbide’s 1989 settlement.

US corporate giant Dow Chemicals has owned Union Carbide since 2001, but has refused to compel its subsidiary to return to India to face outstanding charges of culpable homicide. Both companies refuse to pay for a clean-up of the contaminated site.

The US government should support India’s efforts to bring Union Carbide to justice.

“India’s move should serve as a wake-up call to Union Carbide and their masters at Dow Chemicals,” said Audrey Gaughran.

“The Bhopal story isn’t going away and it will haunt Union Carbide and Dow until justice is served.