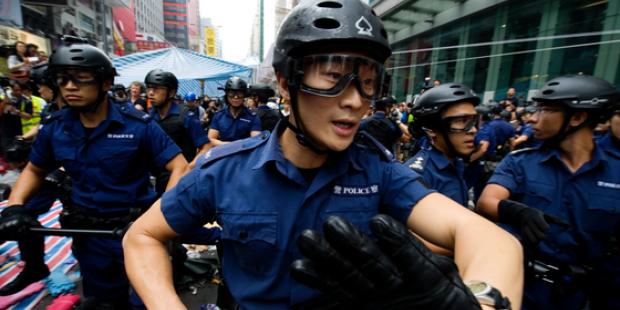 With thousands of pro-democracy protesters expected to take to Hong Kong’s streets again over the weekend, the city’s police chief must urgently stamp out any arbitrary and excessive use of force by police officers, Amnesty International said.

The past two days have seen major police operations to disperse protesters from the Mong Kok area of the city marred by incidents of unjustifiable force against protesters, bystanders and journalists.

“Police Commissioner Andy Tsang must not turn a blind eye to the use of excessive force by his officers. There needs to be an unequivocal message from the top that any officer violating human rights will be held to account.”

Police have made at least 159 arrests since Tuesday for alleged offences including unlawful assembly, obstructing a police officer and contempt of court.

Student leaders Joshua Wong and Lester Shum have said that they were beaten during their arrests in Mong Kok on Wednesday, which neither resisted. Both were released on bail on Thursday.

Amnesty International observers witnessed several incidents of police beating passers-by with batons on Wednesday night and the early hours of Thursday. Video footage on the websites of local Chinese newspapers Apple Daily and Mingpao also showed similar incidents. One officer caught on camera hitting a by-stander has since been removed from the clearing operation.

Pictures on local TV and social media show demonstrators about to be arrested being dragged behind police lines, circled by officers so that onlookers’ views are blocked, and in some cases re-emerging with visible injuries.

In a video posted on Facebook, one police officer is seen removing another one’s identity number during the clearing operations. International standards require that police personnel are always individually identifiable. Police have also obstructed media from reporting on arrests of protesters, according to the Hong Kong Journalists Association and video footage from local TV stations NOW TV and Apple Daily.

On Thursday evening, Wong Chun-lung, a photographer for local newspaper Apple Daily was arrested on suspicion of assaulting police and resisting arrest. He was released on bail on Friday morning and said he was filming the protests when he was detained.

“Police must not only act within the law, they must also be clearly seen to do so. The apparent removal of identity numbers, and the obstruction of journalists from reporting, raises serious questions as to whether the police want to avoid scrutiny,” said Mabel Au.

Earlier this week, police announced seven officers had been arrested on suspicion of assaulting pro-democracy activist Ken Tsang on 15 October, which was filmed by a local TV news channel.

“It’s encouraging that Hong Kong’s police have investigated and acted on the evidence in the case of Ken Tsang. Sadly though, instead of ushering in more transparency, the lesson some officers appear to have taken away is to cover up your ID and block media from reporting,” said Mabel Au.

“Amnesty International urges police to show restraint in any operations against pro-democracy protesters in the coming days.”