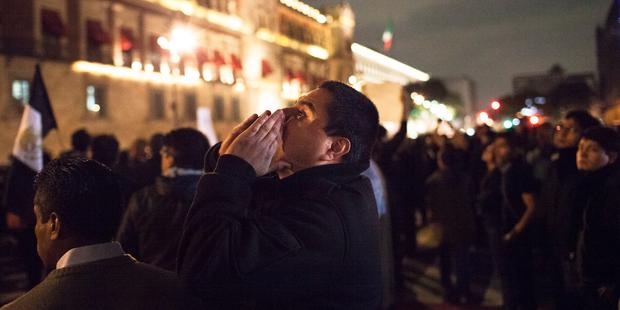 Mexicans protesting at the disappearance of 43 students in Iguala, Guerrero.(C)Brett Gundlock/Getty Images

Mexico must drop overblown charges and urgently release 11 demonstrators who have been unfairly held in two remote high-security prisons after protesting at the disappearance of 43 students in Iguala, said Amnesty International ahead of a crucial hearing on the case on Saturday.

The organization is also calling for an immediate investigation into allegations that the police officers beat and threatened the protesters while in detention.

The three women and eight men have been charged with criminal association, mutiny and attempted homicide of a police officer. The only piece of evidence which incriminates them is the testimony of the five police officers who arrested them. Unless sufficient evidence is presented to support the charges, the protesters must be released.

Such acts raise the question of whether there is a deliberate attempt to discourage legitimate protests.
In the lack of adequate evidence, such charges should never have been pressed in the first place.”

Most of the detainees who have had access to lawyers of their choice have reported that police officers beat and threatened them while in detention. According to their lawyers, the demonstrators have bruises and scars around their eyes and on their arms.

The three women have been jailed in the more remote high-security prison in Nayarit state, 700km away from Mexico City, where contact with relatives and lawyers is severely limited.

Rather than pressing unsubstantiated charges against demonstrators, the Federal Attorney General’s Office should focus on establishing the whereabouts of the 43 disappeared students and bring those responsible to justice.

Forty-three students from the Raúl Isidro Burgos Rural Teacher Training College in the state of Guerrero, have been disappeared since 26 September 2014.

They were picked up by local police in the town of Iguala and, according to the official investigation, handed over to a criminal gang. Serious allegations of human rights violations and collusion between local authorities and criminals had been made before but federal and state authorities decided to take no action.
Since their disappearance, several mass graves have been found in Guerrero. Forensic tests are ongoing but so far none of the uncovered human remains belong to the disappeared students.

Amnesty International has documented other cases of police abuse during demonstrations in Mexico City.

On 1 December 2012 and 2 October 2013, a number of protesters were arbitrarily arrested and charged with serious crimes. Most were tried and acquitted months later due to lack of evidence. Some suffered torture or other forms of ill-treatment during their arrest or while in detention. Although the cases were adequately documented, nobody has been brought to account for these human rights violations.