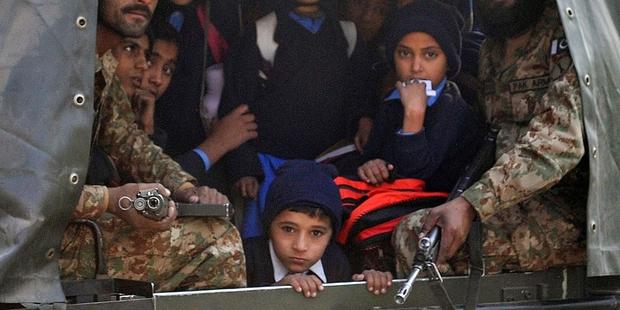 The vast majority of those killed in the attack were school children. （C）AFP/Getty Images

Today’s Taliban attack on a school in the Pakistani city of Peshawar shows a merciless disregard for human life and highlights the urgent need for protection of civilians in the area, Amnesty International said.

At least 126 people, mainly children, were killed when several armed men entered the school and began firing indiscriminately at students and teachers in one of the most shocking Taliban attacks in recent memory.

“There can be absolutely no justification for targeting children in this way. This unconscionable Taliban attack is a grave reminder that civilians in north-west Pakistan desperately need effective protection from militant groups,” said David Griffiths, Amnesty International’s Deputy Director for Asia-Pacific.

“Of prime importance now is that the Pakistani authorities take effective steps to protect civilians and minimize the risk of this type of sickening tragedy being repeated.”

A Taliban spokesman said the attack was a response to recent Pakistani army operations in nearby North Waziristan, in which hundreds of Taliban fighters were killed. The school, in an area of Peshawar close to a military cantonment, was run by the army and some of the students were children of army members.

The Taliban have targeted students in Pakistan on numerous occasions, but this is by far their deadliest attack on a school.