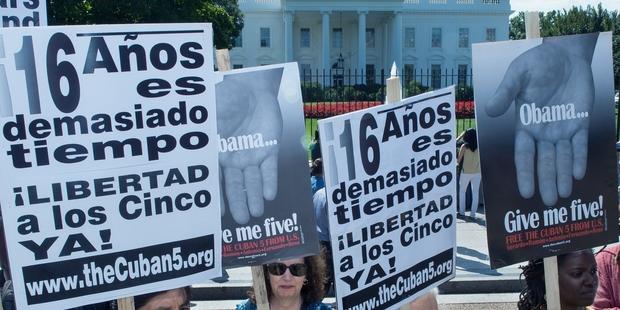 For years, Amnesty International campaigned on behalf of the “Cuban Five" prisoners in the USA.(C)PAUL J. RICHARDS/AFP/Getty Images

Today’s prisoner exchange between the USA and Cuba presents the best opportunity in more than half a century to forge an agenda for human rights change amid efforts to normalize relations between the two countries, Amnesty International said.

Alan Gross, an alleged US aid worker imprisoned in Cuba for the past five years after being accused of spying, and the three remaining “Cuban Five” prisoners held in the USA on espionage charges since 1998, had been released and were en route to their respective home countries on Wednesday morning local time.

“Today’s prisoner swap is a very welcome opening salvo in a long-awaited overhaul of US-Cuban relations after more than half a century of thorny relations, sanctions and mutual recriminations. Any efforts at political and diplomatic change must now go hand-in-glove with historic human rights change in Cuba,” said Erika Guevara Rosas, Americas Director at Amnesty International.

“If the US embargo on Cuba, and its negative impact on the economic and social rights of Cubans, is lifted as part of efforts to normalize relations between the two countries, it will mean Cuban authorities can no longer use the crippling sanctions as an excuse for lagging behind on its international human rights obligations.”

For years, Amnesty International campaigned on behalf of the “Cuban Five”. The organization echoed concerns raised by a UN Working Group that the men were not afforded fair trials in Miami, and criticized the USA for not granting visas to allow several of the men’s wives to visit them in prison. Those released today include Gerardo Hernandez, 49, Antonio Guerrero, 56, and Ramon Labañino, 51. Two others, Rene Gonzalez, 58, and Fernando Gonzalez, 51, were previously released.

“This release after more than a decade and a half behind bars in the USA, following proceedings that fell short of international fair trial standards, must come as an immense relief for these three men and their families. Concerns raised by Amnesty International and others over their trial and treatment should have prompted US authorities to grant these men clemency years ago,” said Erika Guevara Rosas.