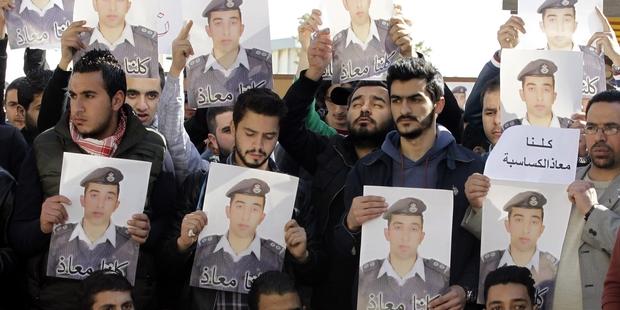 The vicious summary killing of a Jordanian pilot who was burned alive by the armed group that calls itself the Islamic State (IS) is an atrocious attack against humanity, said Amnesty International, but responding with executions is not the answer.

The video showing Muath al-Kasasbeh being burned alive in a cage has sent shockwaves across the world. This morning at dawn the Jordanian authorities executed Sajida al-Rishawi and Ziad al-Karbouli, two Iraqis linked to al-Qa’ida, in apparent revenge for his killing.

The abhorrent killing of Muath al-Kasasbeh is a war crime and an all-out attack on the most basic principles of humanity,” said Philip Luther, Director of Amnesty International’s Middle East and North Africa Programme.

“The Jordanian authorities are rightly horrified by this utterly reprehensible killing but the response should never be to resort to the death penalty, which itself is the ultimate cruel, inhuman and degrading punishment. The death penalty should also not be used as a tool for revenge. The IS’s gruesome tactics must not be allowed to fuel a bloody cycle of reprisal executions.”

Under international humanitarian law holding hostages is a war crime and all detainees should be treated humanely by their captors.

“The killing of Muath al-Kasasbeh while he was trapped in a cage in such a brutal and orchestrated manner shows the savagery that a group like the IS is capable of,” said Philip Luther.

One of those executed by the Jordanian authorities today was Sajida al-Rishawi, who was on death row for her role in the 2005 bombing in Amman that killed 60 people. Her lawyer’s request for her to undergo psychiatric assessment to assess her mental fitness to stand trial was refused by the court.

According to a report by the UN Special Rapporteur on torture, following his visit to Jordan in 2006, she was tortured during interrogation over a month-long period in the custody of Jordan’s General Intelligence Department (GID).

Ziad Karbouli, the second person executed this morning, was convicted on charges of belonging to an illegal organization, possessing explosives leading to death of a person and murder. His lawyer told Amnesty International that he had been forced to confess under duress.

After an eight-year halt in executions, Jordan resumed its use of the death penalty in December 2014 when it carried out the executions of 11 men. Amnesty International is calling on Jordan to immediately establish an official moratorium on executions with a view to abolishing the death penalty.

Muath al-Kasasbeh, a fighter pilot in the Jordanian air force, was captured when his plane came down near al-Raqqa, Syria, during a mission against the IS in December 2014.

The IS has killed dozens of its captives in the past year including in the past month the Japanese journalist Kenji Goto and a second Japanese hostage, Haruna Yukawa.

Amnesty International calls on the IS to cease summary killings, abductions and hostage taking.