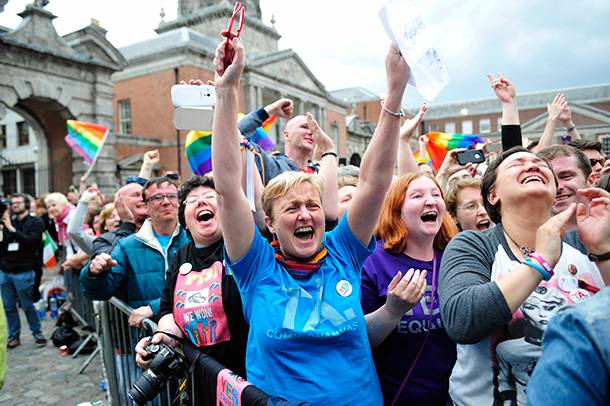 Today Ireland became the first country in the world to introduce full civil marriage equality for all its people, regardless of their sexual orientation, by way of a universal ballot. In the historic ballot the Irish electorate voted by 62.1% to 37.9% to endorse an amendment to the Irish Constitution asserting that “‘Marriage may be contracted in accordance with law by two persons without distinction as to their sex.”

Ireland now becomes the 19th country in the world to approve the freedom to marry for same-sex couples, and the first to do so by a popular ballot.

Colm O’Gorman, Executive Director of Amnesty International Ireland said: “This decision by the Irish people, in a national referendum, is enormously important. It will obviously have profound significance to people here in Ireland, but it will also echo around the world. It sends a message to LGBTI people everywhere that they, their relationships and their families matter. That they are entitled to the same human rights as their straight brothers and sisters, and to the full and equal protection of the law.

“It sends a powerful signal to Putin’s Russia, to Museveni’s Uganda, and to governments and states which continue to discriminate against LGBTI people and violate their human rights. Most importantly it sends a message of hope to those all over the world who fight for justice, freedom and equality”.

The referendum was held just over two years after the Constitutional Convention, a citizen’s assembly established by the Irish Government, recommended that the Irish Constitution be amended to allow for civil marriage for same-sex couples. The referendum victory is the result of many years of campaigning by civil society groups including Marriage Equality, the Irish Council for Civil Liberties and GLEN (Gay and Lesbian Equality Network).

Colm O’Gorman said, “Amnesty International Ireland is proud to have been part of this campaign, and we are delighted with the result. We are especially heartened at the tone and focus of the campaign. It has been, for the most part, affirming, positive and even joyous. This was especially evident in the energy and commitment shown by the many thousands of people who came together under the Yes Equality banner in cities, towns and villages right across Ireland to canvass door to door and street by street. They made this possible, and this is their victory.”