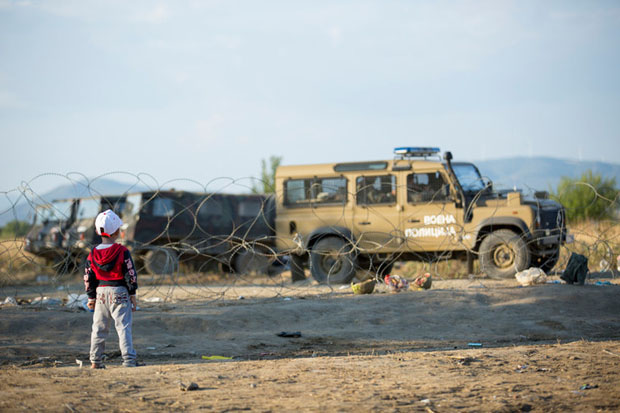 On 5 March 1946, in a small college gym in Missouri, Winston Churchill warned: “From Stettin in the Baltic to Trieste in the Adriatic, an iron curtain has descended across the continent.”

Seventy years after Churchill gave that speech, a new iron curtain is descending across Europe. Made of razor wire, and of failed asylum policies. It can be seen at Spanish enclaves Ceuta and Melilla in the Mediterranean and at Idomeni in northern Greece, where this week Macedonian riot police tear-gassed desperate families of refugees trying to cross from Greece.

Seventy years after Churchill gave that speech, a new iron curtain is descending across Europe. Made of razor wire, and of failed asylum policies.The old Iron Curtain kept people in, the new one keeps people out.

EU member states have built more than 235km of fences at the EU’s external borders: between Hungary and Serbia, Greece and Turkey, Bulgaria and Turkey, and this week, Austria and Slovenia. Neighbours like Turkey have become Europe’s border guards, pushing migrants and refugees back, sometimes even shooting them.
With almost all land borders of Europe sealed off, more than a million refugees and migrants arriving in Europe in 2015 risked death coming by sea.

For those who do survive the crossing the plight is far from over, often having to walk for days, travelling through numerous countries, sleeping rough in the cold, before being able to seek safety in a country with a functioning asylum system.

Amnesty International has spoken to refugees fleeing war and persecution in Afghanistan, Eritrea, Iraq and Syria. They would rather not have left their homes, but most had to flee for their lives.

Read the rest of the article at Newsweek.