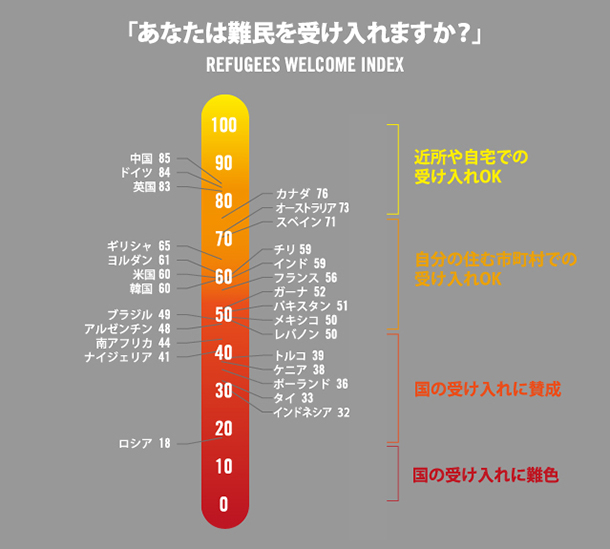 The vast majority of people (80%) would welcome refugees with open arms, with many even prepared to take them into their own homes, according to a global survey commissioned by Amnesty International.

The new Refugees Welcome Index, based on a global survey of more than 27,000 people carried out by the internationally renowned strategy consultancy GlobeScan, ranks 27 countries across all continents based on people’s willingness to let refugees live in their countries, towns, neighbourhoods and homes.

The survey shows people say they are willing to go to astonishing lengths to make refugees welcome. It also shows how anti-refugee political rhetoric is out of kilter with public opinion.

The Refugees Welcome Index was prepared by asking 27,000 people in 27 countries how closely they would accept refugees on a sliding scale: in their home, their neighbourhood, their city/town/village or in their country – or if they would refuse them entry to the country altogether.

The survey used to construct the Index also asked two other questions about access to asylum and current refugee policies.

Governments should do more to help refugees:

To respond to the global refugee crisis, Amnesty International is calling on governments to resettle 1.2 million refugees by the end of 2017. That is far more than the 100,000 per year governments are currently taking annually, but less than a tenth of the 19.5 million refugees in the world today.

Amnesty International is also calling for governments at next week’s World Humanitarian Summit in Istanbul on 23-24 May to commit to a new, permanent system for sharing the responsibility to host and assist refugees.

GlobeScan is a strategy consultancy specializing in stakeholder intelligence and engagement in the areas of reputation, sustainability and purpose. We help global companies, multilateral organizations and international NGOs build stronger, more trusting relationships with their stakeholders to deliver long-term success.