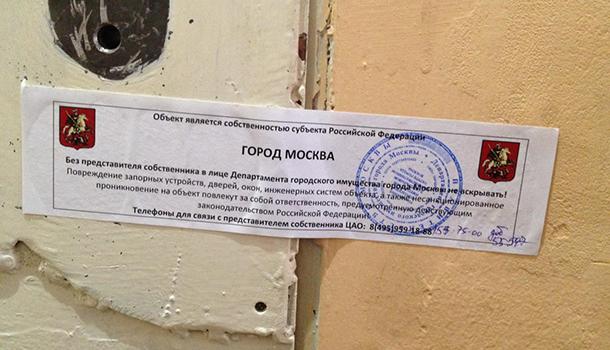 On the morning of 2 November, Amnesty International’s Moscow-based staff arrived at their office to discover the locks had been changed, the electricity had been cut off, and the door had been sealed shut with a notice from Moscow’s municipal property authority. The organization received no prior warning and no explanation for the closure.

Attempts to resolve the issue have so far been stonewalled by municipal authorities, who falsely claimed that Amnesty International was in arrears on its rent, and terminated the organization’s lease in a clear abuse of process.

“If the authorities remain unwilling to solve this issue, it will soon start to look ominously like a deliberate move to obstruct our work to defend human rights in Russia. It is becoming increasingly difficult not to see this incident through the prism of the wider crackdown on Russian civil society,” said John Dalhuisen, Amnesty International’s Europe and Central Asia Director.

“We will continue to attempt to get to the truth of why this happened and resolve the issue with the relevant authorities so we can continue our crucial and legitimate work. This is not being made any easier by the silence of the Moscow City authorities.”

Later in the day, the municipal property authority – which has leased the property to Amnesty International for more than 20 years – issued a statement to journalists, alleging that the organization had failed to pay its rent.

This assertion is demonstrably false. Amnesty International has documents proving the rent has been paid, up to and including October this year. This was acknowledged orally this morning by an official in the finance section of the State Property Department of Moscow City Administration, who said that this could not be confirmed in writing as the organization was no longer formally a tenant. Attempts to reach senior officials with the department have been unsuccessful.

“Changing our locks and turning off our lights has undoubtedly come as a setback, but we will not be cowed into silence or deterred from standing up for human rights in Russia,”said John Dalhuisen.

Amnesty International’s Moscow-based staff received a call from the head of Moscow property department on Thursday evening. He acknowledged a mistake may have been made, and invited them to a meeting to resolve the issue on Monday.