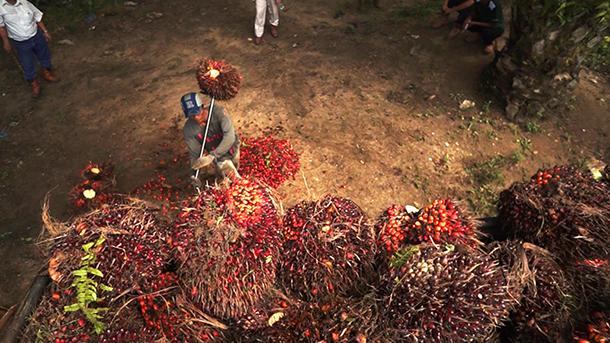 The world’s most popular food and household companies are selling food, cosmetics and other everyday staples containing palm oil tainted by shocking human rights abuses in Indonesia, with children as young as eight working in hazardous conditions, said Amnesty International in a new report published today.

“Companies are turning a blind eye to exploitation of workers in their supply chain. Despite promising customers that there will be no exploitation in their palm oil supply chains, big brands continue to profit from appalling abuses. These findings will shock any consumer who thinks they are making ethical choices in the supermarket when they buy products that claim to use sustainable palm oil,” said Meghna Abraham, Senior Investigator at Amnesty International.

“Corporate giants like Colgate, Nestlé and Unilever assure consumers that their products use ‘sustainable palm oil’, but our findings reveal that the palm oil is anything but. There is nothing sustainable about palm oil that is produced using child labour and forced labour. The abuses discovered within Wilmar’s palm oil operations are not isolated incidents but are systemic and a predictable result of the way Wilmar does business.

“Something is wrong when nine companies turning over a combined revenue of $325 billion in 2015 are unable to do something about the atrocious treatment of palm oil workers earning a pittance.”

Amnesty International spoke to 120 workers who work on palm plantations owned by two Wilmar subsidiaries and three Wilmar suppliers in Kalimantan and Sumatra in Indonesia. The investigation exposed a wide range of abuses including:

Wilmar acknowledged that there are ongoing labour issues in its operations. Despite these abuses, three of the five palm growers that Amnesty International investigated in Indonesia are certified as producing “sustainable” palm oil under the Roundtable on Sustainable Palm Oil, a body set up in 2004 to clean up the palm oil sector after environmental scandals.

“This report clearly shows that companies have used the Roundtable as a shield to deflect greater scrutiny. Our investigation uncovered that these companies have strong policies but none could demonstrate that they had identified obvious risks of abuses in Wilmar’s supply chain,” said Seema Joshi, Head of Business and Human Rights.

Using export data and information published by Wilmar, Amnesty International researchers traced palm oil to nine global food and household companies. When approached, seven of the firms confirmed they buy palm oil from Wilmar’s Indonesian operations, but only two - Kellogg’s and Reckitt Benckiser - were willing to give any level of detail about which products were affected.

All but one of these companies are members of the Roundtable on Sustainable Palm Oil, and claim they use “sustainable palm oil” on their websites or product labels. None of the companies Amnesty International contacted denied that the abuses were taking place, nor did any provide examples of action taken to deal with labour rights abuses in Wilmar’s operations.

“Companies must be more transparent about what goes into their products. They must disclose where the raw materials in the products on our supermarket shelves come from. Until they do, they will be benefiting from and contributing in some way to the labour abuses happening. They are showing a total lack of respect for customers who think they are making ethical choices at the checkout counter.”