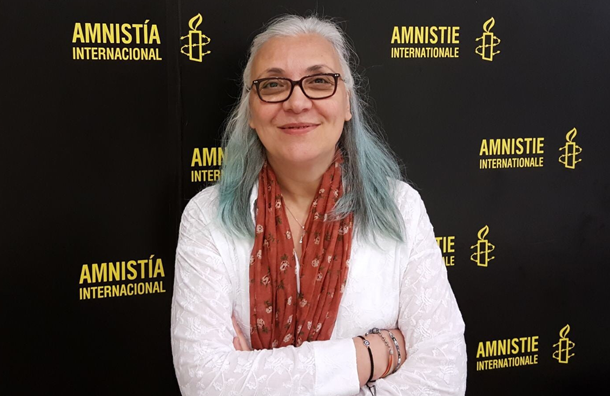 Responding to the news that Idil Eser, Director of Amnesty International Turkey, was detained on Wednesday along with seven other human rights defenders and two trainers during a digital security and information management workshop in Büyükada, Istanbul and are being investigated for membership of an 'armed terrorist organization, Salil Shetty, Amnesty International’s Secretary General, said:

“The absurdity of these accusations against Idil Eser and the nine others cannot disguise the very grave nature of this attack on some of the most prominent civil society organizations in Turkey.

“Their spurious detention while attending a routine workshop was bad enough: that they are now being investigated for membership of an 'armed terrorist organization' beggars belief.

“World leaders currently sitting in Hamburg have been remarkably tolerant of Turkey’s human rights meltdown. With President Erdoğan now in their midst, this would be a good time to speak out firmly and call for the release of all human rights defenders currently behind bars.”

At 10am on 5 July, eight human rights defenders, including Amnesty International’s Turkey Director Idil Eser and two international trainers were detained by police at a hotel in Büyükada, Istanbul, where they were attending a workshop. All the detainees were denied access to lawyers for more than 28 hours, in contravention of Turkish law, which states a maximum time of 24 hours. The group were also denied the right to contact family members, again in contravention of Turkish law.

The authorities refused to confirm where the human rights defenders were being held until around 3pm on 6 July.

The state of emergency put in place after last year’s failed coup attempt allows for seven days of pre-charge detention, extendable for a further seven days on the request of the prosecutor.

Two foreign trainers – a German and a Swedish national – are still being held on the island and have been granted access to a lawyer.

The Turkish authorities must immediately and unconditionally release all 10 detainees.

These detentions come less than a month after Amnesty International’s Turkey chair, Taner Kiliç, was remanded in prison custody on baseless charges.