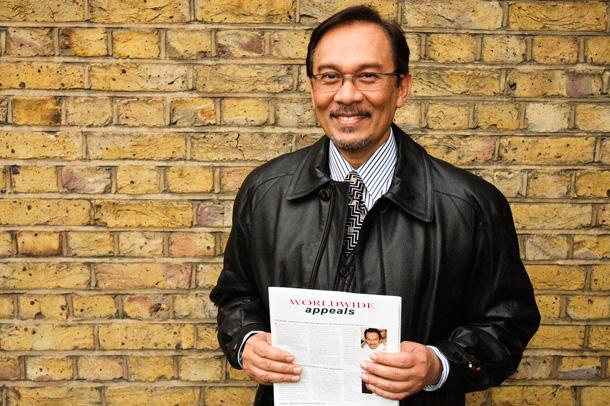 The release of long-time Malaysian opposition leader and Amnesty International prisoner of conscience Anwar Ibrahim is a landmark moment for human rights in the country, the organization said today.

Anwar, who has twice been imprisoned on politically motivated “sodomy” and corruption charges, received a royal pardon following last week’s election win for the Pakatan Harapan coalition led by Mahathir Mohamad. Amnesty International has campaigned on Anwar’s case for 20 years.

“This day should go down as a landmark moment for human rights in the country. The new government should now repeal the repressive laws that muzzle freedom of expression and assembly and that were used relentlessly to target government critics andhuman rights defenders under the previous government.”

He was first arrested in 1998, while Deputy Prime Minister, after calling for political reform. He was dismissed from government and charged with corruption and committing ‘illegal’ homosexual acts – allegations he has always denied.

Anwar was beaten up while in police custody and convicted for corruption in 1999 and for ‘sodomy’ in 2000. He remained imprisoned until 2004 when his conviction was overturned.

The second ‘sodomy ’ case against Anwar Ibrahim began in 2008. The Malaysian High Court cleared him of all charges in 2012, but the Court of Appeal overturned the acquittal in March 2014 and sentenced him to five years in prison.

On 10 February 2015, Malaysia’s Federal Court, the highest court in the country, upheld the decision of the Court of Appeal. The conviction disqualified him from political office and contesting the 2018 general elections.

He served more than three years of his latest jail term and was due to be released in June. But the royal pardon that Mahathir Mohamad has promised to seek for him will make him eligible for office again. Mahathir has vowed to step aside and allow Anwar to assume the premiership once he has been pardoned and elected to parliament.

Anwar Ibrahim’s repeated imprisonments occurred amid a wider crackdown on freedom of expression and peaceful political dissent in Malaysia.

Amnesty International began campaigning on Anwar Ibrahim’s case when he was first arrested in 1998.  Its members have since participated in numerous letter-writing campaigns calling for his release.

Until early this year, Anwar served as the de facto leader of the opposition as the head of Pakatan Rakyat (People’s Alliance), a coalition of three opposition parties.

However, ahead of the 2018 general election he joined forces with Mahathir to topple Najib Razak’s Barisan Nasional coalition party, which had been in power for almost six decades.