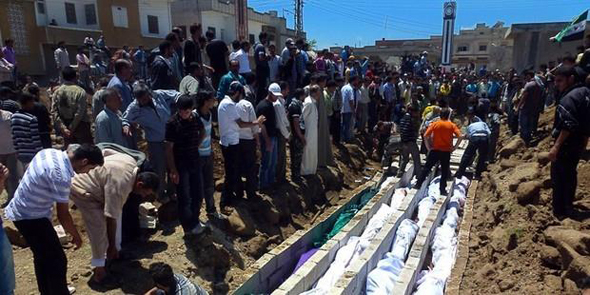 Houla residents bury the bodies of dozens of people killed in the Syrian military's assault on the town.

The United Nations Security Council must move beyond condemnation of Friday’s attack that killed scores of civilians in the Syrian town of Houla and immediately refer the situation to the International Criminal Court (ICC), Amnesty International said.

The Syrian military’s barrage of shells, mortars and rockets and raids on the residential area of Teldo on Friday left at least 108 dead, including 34 women and 50 children, according to sources Amnesty International has talked to, among them an eyewitness to the attack’s aftermath.

“The high civilian death toll ? including scores of women and children ? in Houla must spur the Security Council to act in unison and immediately refer the situation in Syria to the ICC,” said Philip Luther, Middle East and North Africa Programme Director.

“As the killings escalate, the UN observer mission to Syria must have its scale and mandate enhanced, and the Syrian government must allow the Independent International Commission of Inquiry set up by the UN Human Rights Council to enter the country to investigate allegations of abuse by both sides to the conflict.”

Amnesty International has received the names of more than 1,300 people killed in Syria since the start of a UN observer mission on 14 April.

According to local activists, violence erupted in Houla after troops at a Syrian military checkpoint opened fire on peaceful protesters on Friday afternoon, prompting members of the armed opposition to attack the checkpoint. An unconfirmed number of individuals were killed in the exchange.

It is unclear where the armed opposition members withdrew to after the clashes.

From around 8pm Friday until around midnight, an eyewitness told Amnesty International, the Syrian military fired artillery shells and rockets into areas of Houla, at times falling at the rate of one per minute.

He added that men in black uniforms who appeared to be from Syria’s Military Intelligence conducted armed raids in Teldo, shooting scores of civilians dead. When UN monitors arrived in the area the following morning, they helped residents to carry bodies to a nearby mosque.

Some bodies could not be retrieved due to the continued presence of Syrian security forces.

Sixty-two of those killed were from the Abd al-Razaq family in Teldo. All had been shot dead, except for a few children whose skulls had been smashed, presumably by rifle butts.

Many men are believed to have fled the area in advance amid rumours they would be targeted in an imminent attack.

Some people reportedly remain missing since Friday’s assault on Houla ? it is not certain if they fled or were abducted.

In recent days, activists say the security presence around the town has increased, with four military checkpoints now posted along the main road.

Also on Sunday, a spokesman for the Ministry of Foreign Affairs said that a “judicial military committee” had been established to investigate the events.

“The history of previous internal investigations that the Syrian authorities say they have set up gives no cause to expect a meaningful outcome from this one,” said Philip Luther.

“We do not know of a single suspected perpetrator of abuses by the regime’s forces having been brought to justice throughout these 14 months of protest and unrest.”

The UN Security Council on Sunday condemned the Houla attacks, which it said “involved a series of government artillery and tank shellings on a residential neighbourhood”.

But it has yet to take concrete action to stop similar attacks from taking place.

“Most importantly, it should support the transfer of the situation in Syria to the ICC.”

As early as April 2011, Amnesty International decried crimes against humanity amid the Syrian government’s crackdown on protesters that began in March last year. It has repeatedly called on the UN to refer the deteriorating security situation to the ICC and made clear that the crimes are subject to universal jurisdiction.

The organization has received the names of some 9,750 people who have been killed in that time, including more than 700 children.