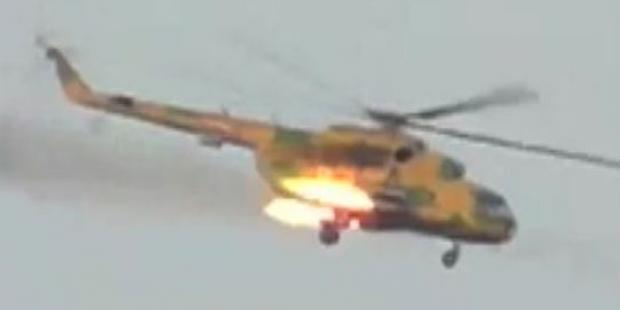 The increased use of helicopters by the Syrian army is putting civilians at even greater risk and further strengthens the case for an international arms embargo, Amnesty International said today amid reports that a Russian ship carrying strike helicopters to Syria had been stopped in the North Sea.

The UK Foreign Office said on Tuesday that it was “aware of a ship carrying a consignment of refurbished Russian-made attack helicopters heading to Syria”. The ship is now reported to be returning to Russia after its insurance was revoked.

"As confrontations between the Syrian army and armed opposition groups have intensified in recent weeks, the Syrian army seems to be resorting ever more to the use of combat helicopters, which risks increasing civilian casualties,” said Donatella Rovera, Amnesty International’s Senior Crisis Adviser, who has just returned from spending several weeks in Syria, where she met victims of indiscriminate fire from helicopters in the north of the country.

“In this context, anyone supplying attack helicopters - or maintaining, repairing or upgrading them - for the Syrian government displays a wanton disregard for humanity.”

The latest shipment underscores the need for UN members to agree an effective Arms Trade Treaty - when final negotiations begin in a few weeks - that will protect human rights and stop arms transfers where there is a substantial risk they are likely to be used for serious human rights violations or international crimes.

In the course of its research work in Syria during April and May, Amnesty International has found that helicopters have regularly been used for cover and surveillance during ground operations.

Helicopters have also been used to fire machine guns and reportedly rockets. As with other arms, Syrian forces have used helicopters recklessly, leading to civilian casualties.

In many areas Amnesty International visited in May and June, residents described how the army swept into their town or village with dozens of tanks and armoured vehicles, in some cases backed up by combat helicopters, firing indiscriminately and targeting those trying to flee.

A 23-year-old woman from Taftanaz, east of Idlib, told Amnesty International she believed she had been hit in the thigh by a machine gun fired from a helicopter as she tried to flee the town on 3 April 2012:

“As the army was coming in, I and my sisters and sisters-in-law and the children all got into my father’s pick-up truck to go somewhere safe out of town. Many other residents were also fleeing and there were helicopters shooting from above, and just as we were leaving town I was shot in the thigh; probably it was from the helicopter as there was no army in the area. It was terrifying especially because my baby boy was sitting on my lap and it was lucky that the bullet missed him.”

A 41-year-old construction worker and father of eight young children from ‘Anadan, north of Aleppo, also told Amnesty International he was shot in both legs from a helicopter as he was on his way home from his work in the late afternoon at the end of February.

Amnesty International also received testimonies from other residents of ‘Anadan who were injured by bullets fired from machine guns mounted on helicopters on that day.

Amnesty International has called on the UN Security Council to immediately impose an arms embargo on Syria with the aim of stopping the flow of weapons to the Syrian government, and establish an effective mechanism to monitor compliance.

In the absence of such an embargo, all governments must immediately halt transfers to the Syrian government of all weapons, munitions, military, security, and policing equipment, training and personnel. Any country considering supplying arms to the armed opposition should have in place the necessary mechanisms to ensure the material supplied is not used to commit human rights abuses and/or war crimes.