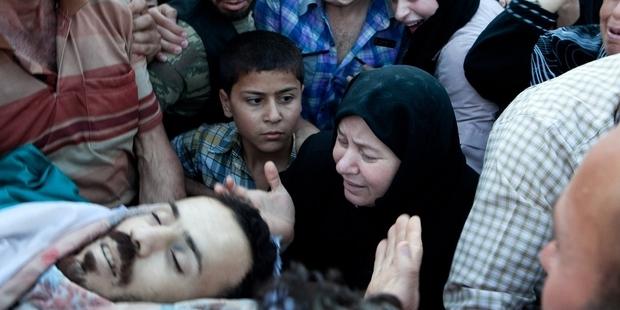 Urgent action must be taken to stop the deadly cycle of repression and abuse in Syria.

Decisive steps are needed to end the increasingly bloody cycle of repression and abuse in Syria as the armed conflict threatens to further spread and intensify, Amnesty International said ahead of an international Friends of Syria meeting in Paris on 6 July.

The organization called for the imposition of an immediate arms embargo aimed at stopping the transfer of arms to the Syrian government, a Security Council referral of the situation to the Prosecutor of the International Criminal Court, and an assets freeze on President Bashar al-Assad and his close associates.

Amid growing reports of abuses by members of the armed opposition, states should also stop arms transfers to the opposition wherever there is a substantial risk that they are likely to be used for war crimes or other human rights abuses.

Amnesty International is also calling for a dedicated human rights monitoring presence in Syria to monitor, investigate and publicly report on crimes against humanity, war crimes and other grave human rights abuses committed by all sides.

“The time for mere talk and handwringing about Syria’s dire situation has long since passed, with in excess of 12,000 individuals already killed during more than 16 months of protest and unrest,” said Ann Harrison, Middle East and North Africa Programme Deputy Director at Amnesty International.

The Friends of Syria, led by France, the USA, Britain, Germany, and Arab nations Saudi Arabia and Qatar, is a contact group that brings together officials from international organizations and more than 60 countries, including most European Union and Arab League members and seeks to co-ordinate Western and Arab efforts to stop the violence in Syria.

“We expect the Friends of Syria to leave this meeting in France with a clear plan to end crimes under international law and ensure justice, truth and full reparation for victims,” said Ann Harrison.

“They must exert influence on the UN Security Council to once and for all refer the situation to the ICC, impose an arms embargo that will stop the transfer of any arms and related equipment to the Syrian government, and to freeze the assets of President Bashar al-Assad and his senior associates.”

Amnesty International believes that any state considering the supply of arms to opposition fighters for the protection of civilians must carry out rigorous risk assessments based on objective information to ensure that there is not a substantial risk those arms would be used to commit or facilitate crimes under international law. If there is a substantial risk that arms will be used to commit war crimes or other serious abuses, those transfers must be stopped.

The recent international Special Court for Sierra Leone judgment against former Liberian President Charles Taylor held that any government official or other person who provides arms to government forces or to armed opposition groups who is aware of the substantial likelihood that they would be used to commit war crimes or crimes against humanity would be criminally responsible for aiding and abetting such crimes.

Russia, who along with China has twice vetoed a UN Security Council resolution on Syria and is the Syrian government’s largest arms supplier, has said it will not attend the Paris meeting.

Abuses by both sides

While the overwhelming majority of crimes have been committed by Syrian security forces during more than 16 months of protest and unrest, Amnesty International has been receiving increasing numbers of reports of serious abuses, including possible war crimes by some members of armed opposition groups, including the Free Syrian Army (FSA).

Amnesty International is looking into reports that members of armed opposition groups have been responsible for summary executions of captured members of the security forces and other unlawful killings, abductions of civilians, torture and other ill-treatment, use of children in hostilities and the reckless use and storage of arms.

In situations of armed conflict, all parties, including armed opposition groups, are legally bound by the rules of international humanitarian law (IHL). Serious violations of IHL are war crimes.

“We have documented crimes against humanity taking place in Syria since early on in the government’s crackdown last year, and with intensified fighting between state forces and armed opposition groups in recent months, there is increasing evidence of war crimes being carried out,” said Ann Harrison.

“If the UN Security Council refers the situation in Syria to the ICC, those responsible for the most serious crimes under international law on both sides could face investigation and prosecution.”

Amnesty International urged the Friends of Syria governments to fulfil their shared responsibility to investigate and prosecute war crimes, crimes against humanity and other crimes under international law committed in Syria and seek to exercise universal jurisdiction over these crimes before their national courts in fair trials without recourse to the death penalty.

By setting up joint international investigation and prosecution teams, the Friends of Syria governments would improve the effectiveness of investigations, the possibility of arrests and the co-ordination of prosecutions.