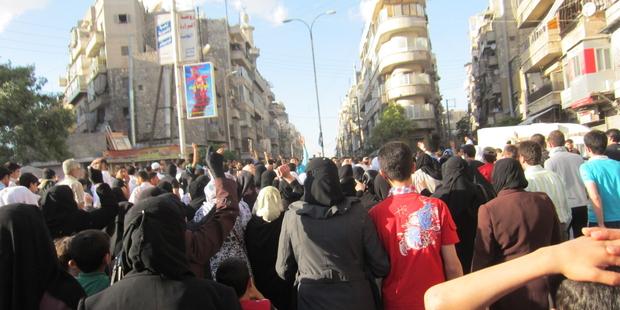 As anti-government protests in Aleppo increased, the state reacted with a characteristically reckless and brutal use of force

The assault by government forces on the city of Aleppo is the culmination of months of a brutal crackdown against dissident voices, Amnesty International said in a new report published today.

The new report All-Out Repression is based on first-hand field investigations by Amnesty International in Aleppo city at the end of May.

It documents how security forces and the notorious government-backed shabiha militias routinely used live fire against peaceful demonstrations, killing and injuring protesters and bystanders, including children, and hunted down the wounded, the medics who treated them, and opposition activists.

“The current onslaught on the city of Aleppo - which puts civilians even more at grave risk- is a predictable development which follows the disturbing pattern of abuses by state forces across the country,” said Donatella Rovera, Senior Crisis Response Adviser at Amnesty International, who recently spent several weeks investigating abuses in northern Syria, including in Aleppo.

The new report provides evidence that families of demonstrators and bystanders shot dead by security forces have been pressured to sign statements saying that their loved ones were killed by “armed terrorist gangs”.

Demonstrations in Aleppo, Syria’s largest city and main economic centre, started later and remained smaller than in other main towns.

As the size and frequency of these anti-government protests in Aleppo increased in recent months, the state security apparatus reacted with a characteristically reckless and brutal use of force that inevitably led to peaceful demonstrators being killed and injured.

Those arrested were routinely tortured, threatened and intimidated while in detention.

The report details a wide range of systematic, state-directed violations including the deliberate targeting of peaceful protesters and activists, the hunting down of injured protesters, the routine use of torture, the targeting of medics providing life-saving emergency treatment to the wounded,  arbitrary arrests and enforced disappearances.

“The peaceful demonstrations I witnessed in different parts of the city invariably ended with security forces firing live rounds at peaceful protesters, their reckless and indiscriminate shooting often killing or injuring bystanders as well as demonstrators,” said Donatella Rovera.

In the report, Amnesty International again calls on the Security Council to ensure a human rights monitoring mission is present in the country, either by strengthening, extending and expanding the paralyzed UN Supervision Mission in Syria (UNSMIS) whose mandate ends in August, or by establishing another mechanism.

The organization reiterates its long-standing calls for the Security Council to refer the situation in Syria to the Prosecutor of the International Criminal Court (ICC), and to impose an arms embargo on Syria with the aim of stopping the flow of weapons to the Syrian government.

Amnesty International wants the Security Council to implement an asset freeze against President Bashar al-Assad and others who may be involved in ordering or perpetrating crimes under international law.

With the crisis in Syria turning into internal armed conflict and with rising reports of abuses by the armed opposition, Amnesty International again calls on all governments considering the supply of arms to the Free Syrian Army (FSA) or other armed opposition groups to first carry out a rigorous risk assessment based on objective information to ensure that there is not a substantial risk those arms would be used to commit or facilitate serious violations of human rights, including crimes under international law.

Amnesty International has been able to investigate independently allegations of human rights violations on the ground in Syria, including in Aleppo and surrounding areas, and concludes that the Syrian government is responsible for mass violations amounting to crimes against humanity.

“It is manifestly evident that the Syrian government has no intention of ending, let alone investigating, these crimes. Indeed it has attempted to prevent any independent investigation of these grave abuses in Aleppo and in other parts of the country,” said Rovera.

“It is incumbent on the international community to provide justice to the Syrian people and to ensure those responsible for such grave violations and crimes are held to account.

“But only a few days ago, the Security Council again failed to agree on a resolution on Syria. The paralysis of the international community over the past 18 months has unsurprisingly resulted in the Syrian government believing it can continue to commit violations, including war crimes and crimes against humanity with impunity.  The situation in Syria should be referred to the International Criminal Court without further delay.”