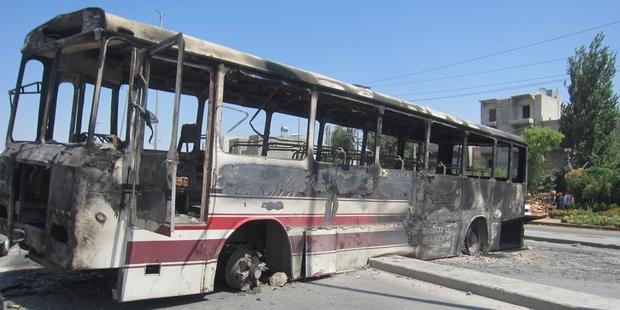 Civilians are enduring a horrific level of violence in the battle for control of Aleppo.

Civilians are enduring a horrific level of violence in the battle between Syrian government forces and opposition fighters for control of Aleppo - the country’s largest city and commercial capital - Amnesty International said in a new briefing on Syria.

The 11-page briefing, is based on first-hand field investigations by Amnesty International during the first half of August.

“The use of imprecise weapons, such as unguided bombs, artillery shells and mortars by government forces has dramatically increased the danger for civilians,” said Donatella Rovera, Amnesty International Senior Crisis Response Adviser, who recently returned from Aleppo.

During a 10-day visit to the city, Amnesty International investigated some 30 attacks in which scores of civilians not involved in hostilities, many of them children, were  killed or injured in their homes, while queuing for bread and even in the places where those displaced by the conflict were sheltering as a result of indiscriminate attacks against residential neighbourhoods.

Among the victims of such attacks were 10 members of the Kayali family, seven of them children, who were killed when their homes were reduced to rubble by two air strikes in the afternoon of 6 August.

Some of the victims died in the very places where they had sought shelter, having been forced to flee their homes by the fighting. Among them was Amina Hindi, who was killed with  her husband, her mother and her three-month-old niece. She and husband had fled their home because of the fighting and were staying with her brother, whose house came under artillery fire on 8 August.

The briefing also documents how civilians were killed and injured while queuing for bread - with the current bread shortage in Aleppo, there are  long queues outside bakeries day and night. On 12 August at 3 am a 13-year-old girl, Kifa’ Samra, and her 11-year-old brother Zakarya were killed along with their neighbour, a mother of 11, while queuing for bread near their home.

“Civilians face a daily barrage of air and artillery strikes by government forces in different parts of the city. For many there is simply nowhere safe and families live in fear of the next attack,” said Rovera.

The inherent dangers associated with urban warfare are compounded by a manifest disregard for the safety of civilians.

“As civilian casualties continue to mount it is imperative that all parties ? government forces and opposition fighters ? comply with international humanitarian law, which requires that they take all feasible precautions to spare civilians,” said Rovera.

“Those responsible for indiscriminate attacks against civilians and other war crimes should expect that they will be held to account.”

The overwhelming majority of victims were killed in air strikes and artillery attacks by government forces, while in some cases the source of the attack could not be established.

Opposition fighters, while mostly fighting with short-range light weapons, have at times also used imprecise or indiscriminate weapons (such as mortars and home-made rockets) that equally pose a danger to civilians.

A further deeply disturbing development highlighted in the briefing is the sharp increase in extrajudicial and summary executions of civilians not involved in the conflict by government forces. Bodies of mostly young men, usually handcuffed and shot in the head, have been frequently found dumped near the  headquarters of the Air Force Intelligence which is completely controlled by government forces.

As the conflict continues there are also growing concerns about increased abuses, including unlawful killings and ill-treatment of captives by opposition fighters belonging to a plethora of armed opposition groups, including the Free Syrian Army (FSA), operating in the city.

Amnesty International has repeatedly called on the FSA leadership to take steps to put an immediate end to such abuses and to ensure that these and any other killings of captives be investigated impartially.

“It is shameful that the international community remains divided over Syria, disregarding the body of evidence of the scale and the gravity of the human rights abuses in Syria and effectively looking the other way while civilians are bearing the brunt,” said Rovera.