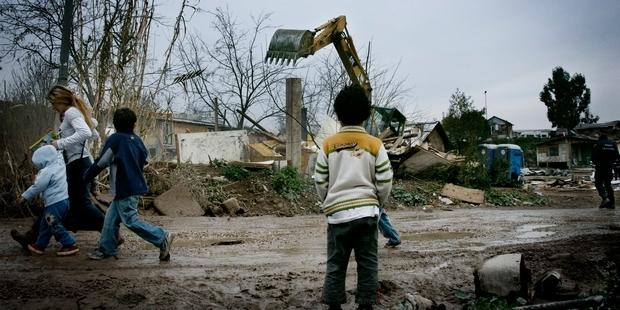 On the edge: Roma, forced evictions and segregation in Italy, exposes the continuing systematic failure of Italian authorities to uphold Roma rights.

In the 10 months since Italy’s highest administrative court ruled the emergency laws targeting the Roma, the “Nomad Emergency”, unlawful, neither reparation nor effective remedy has been given to Roma whose rights were violated because of the three-and-a-half-years long state of emergency.

“The Italian government is not living up to its international obligations and to its commitments to the European Commission. Children, women and men living in camps continue to be evicted without adequate consultation, notice and alternative housing. Inhabitants of informal camps are the worst affected and continue to be kicked out at every opportunity,” said John Dalhuisen, Director of the Europe and Central Asia Programme.

“The recent opening of a new segregated camp, La Barbuta, outside Rome, is a very obvious example of the authorities’ failure to change.”

“Monti’s cabinet does not use the derogatory language of their predecessors. But when it comes to a transition from words to deeds, no real difference can be detected.”

Regardless of promises to promote equal treatment and improve Roma’s living conditions, included in the National Strategy for Roma Inclusion  that the Italian government presented to the EU in February 2012, hundreds of Romani people in Rome and Milan have been forcibly evicted and left homeless this year.

Plans to close authorized or ‘tolerated’ camps continue despite a lack of genuine consultation, and adequate legal safeguards. Living conditions in most authorized camps remain very poor; conditions in informal camps are even worse, with little access to water, sanitation and energy. Ethnic segregation is perpetuated; and Roma remain largely excluded from social housing.

In many cases repeated forced evictions have led Roma to set up shacks in locations where they are exposed to extremely precarious conditions, with very poor access to water, sanitation and other services, and little if any protection from the weather, and infestations of rats and mice.

“I am mighty upset. I lived in an authorized camp, I worked, my children were going to school, and now I have nothing,” said Daniel who has lived in Italy for 12 years and was a resident of the authorized camp of Via Triboniano in Milan until he and his family were forcibly evicted from it in May 2010. He is currently living in an informal camp in Milan.

According to local authority sources in Rome, in the first six months of 2012, more than 850 people were evicted from informal camps. Emergency shelter was offered only in 209 cases –all of them mothers and children. Only five mothers and their nine children accepted the offers, as the majority refused to be separated from their families.

“Only last week, the Italian government co-hosted the sixth World Urban Forum which highlighted a need to improve quality of life. It’s high time for Italian authorities to stop flouting their international obligations and improve the quality of life for the Roma living in authorized and informal camps by providing them with adequate housing, which is their right. Romani families must be enabled to integrate and become equal members of society.”

Amnesty International also recommends that the European Commission starts an infringement procedure against Italy under the Race Equality Directive for its discriminatory treatment of the Roma in relation to their right to adequate housing.

Some hope for the rights of Roma in Italy comes from two recent court decisions related to forced evictions and segregation of Roma.

On 31 July 2012 the mayor of Rome ordered the closure of the camp of Tor de’ Cenci, home to Roma from Bosnia and Macedonia since 1996, officially because of the lack of hygiene and related risks to the health of the inhabitants.

The only alternative housing offered was in the segregated camps of La Barbuta and Castel Romano, both located at a great distance from the city and isolated from services.

Following a request by some of Tor de’ Cenci camp’s remaining families, on 27 August the Lazio administrative tribunal temporarily suspended the mayor’s eviction order and reminded the authorities that they are responsible for maintaining adequate health and safety conditions in the camp until the court can take a definitive decision on the eviction.

In the meantime, between the end of July and the beginning of August 2012, approximately 200 people were transferred from Tor de’ Cenci to La Barbuta, an isolated stretch of land sandwiched between railway tracks, Rome’s orbital road and the runway of Ciampino airport.

Then on 4 August 2012, Rome’s Civil Court accepted a request by local NGOs to stop new transfers of Roma to La Barbuta as a precautionary measure, while it considers claims about the discriminatory nature of the housing provided at the new camp.