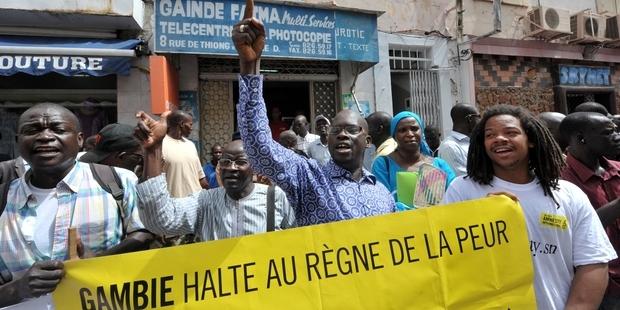 Charges against two journalists detained after they applied for permission to hold a peaceful protest over the executions of nine death row inmates must be dropped by the Gambian authorities, Amnesty International said.

Baboucarr Ceesay, the First Vice President of The Gambia Press Union (GPU) and Abubacarr Saidykhan, an independent freelance journalist, were charged on 10 September with conspiracy to commit a felony.

The two journalists were released on bail yesterday and must report to the police headquarters on Monday 17 September.

They had been arrested three days earlier after they applied to the Gambian police to demonstrate peacefully against the August executions of nine death row inmates.

“This is yet another example of the Gambian government’s total intolerance of criticism,” said Lisa Sherman-Nikolaus, Amnesty International’s West Africa Researcher.

The letter which led to the arrest of the journalists was addressed to the Inspector General of Police and entitled: "Application for a permit to hold a peaceful demonstration."

The letter states: “We will uphold our principle of no violence throughout the process [of the demonstration]. We want to demonstrate because we fear that if we sit and watch there might be another execution.”

“The Gambian authorities must immediately and unconditionally drop all charges against Babourcarr Ceesay and Abubacarr Saidykhan.  They have been targeted solely because they have tried to exercise their right to peaceful freedom of expression and assembly," said Sherman-Nikolaus.

The pair delivered a letter to the Gambian Police on 6 September requesting a permit to hold a peaceful public demonstration the following day.

But they were arrested Thursday evening after they went to a police station, at the request of police officials, sources told Amnesty International.

They were taken to their homes on 7 September where police conducted searches.

Following their arrest, they were held throughout the weekend, for a period exceeding the maximum limit of 72 hours of detention without charge specified in the Gambian Constitution.
Attempts by their lawyer and the Gambian Press Union to visit them in detention them were blocked.

Amnesty International repeatedly tried to confirm details of their detention with the Gambian police, but the police did not provide any information.
Bail was set at GMD250,000 each (about US$8,000).

“The Gambian authorities must protect those who exercise their rights to freedom of expression and assembly, and ensure that journalists and human rights activists can carry out their work without interference from the government," said Sherman-Nikolaus.

Some of the death row inmates in the Gambia are former officials and senior military officers who have been detained for treason.

Amnesty International and 66 other international human rights and West African civil society organizations have expressed outrage at the executions that took place on 23 August, which were carried out in secret and without notification to the individuals executed or their families.