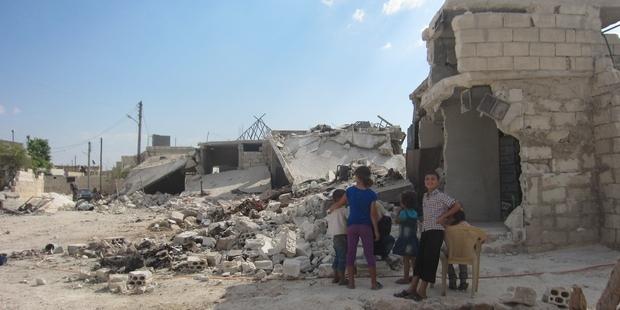 Civilians, many of them children, are the main victims of a campaign of relentless and indiscriminate attacks by the Syrian army, Amnesty International said in a new briefing.

The briefing paper (and accompanying video footage) is based on first-hand field investigations carried out in the first half of September by Amnesty International into attacks which killed 166 civilians, including 48 children and 20 women, and injured hundreds in 26 towns and villages in the Idlib, Jabal al-Zawiya and north Hama regions.

The briefing paper provides fresh evidence of a pattern which has emerged in recent weeks in areas where government forces, pushed into retreat by opposition forces, are now indiscriminately bombing and shelling lost territory - with disastrous consequences for the civilian population.

“The plight of the civilian population in this region of Syria has been under-reported as world attention has largely focused on the fighting in Aleppo and Damascus. But the horrors of what the residents of Idlib, Jabal al-Zawiya and north Hama endure every day is just as harrowing. Such indiscriminate attacks constitute war crimes.”

Civilians are being killed or injured in their homes, while running for cover, or in the very places where they had sought refuge from the bombardments.  On 16 September, eight civilians - five of them children - were killed and many more injured in a series of air strikes in Kafr Awayed in Jabal al-Zawiya. Residents told Amnesty International that seven of the victims were killed at a wedding party and in nearby houses, and a six-year-old boy was killed while buying bread.

The same pattern is repeated throughout the areas which have come under the effective control of opposition forces.

Amnesty International witnessed daily air bombardment, artillery and mortar strikes in towns and villages throughout the region.  The deployment of such imprecise battlefield weapons and munitions against residential areas in recent weeks has resulted in a dramatic increase in the number of civilian casualties.

Among the victims of such attacks were 35 civilians killed in the village of Kafr Anbel in two separate air bombardments.  On 28 August, four air strikes in the market square killed 22 civilians.

On 22 August, a bombardment near a grocery story killed 13 civilians, including 31-year-old Zahia al-Aabbi who collected plastic around the village and then sold it to support her mother, sisters, disabled brother and blind father.

Attacks near hospitals shortly after a large influx of casualties, or by bread queues raise suspicions that such attacks deliberately target large gatherings of civilians, a serious violation of international humanitarian law (IHL) and a war crime.

The high death toll of children documented by Amnesty International further underlines the indiscriminate nature of many attacks by the Syrian Army. In one, four children - Ghofran Habboub, her brother and two cousins - were killed when their home was bombed on 14 August in the village of Shellakh (near Idlib).

A few days later, on 18 August, a large calibre mortar landed in a street in Ma’arat al-No’man, south of Idlib, killing two five-year-old girls, Hajar Rajwan and Ines Sabbouh and two cousins aged 10 and 11, as they played outside their homes.

Some have been killed as they fled for cover or where they sought refuge.  Hundreds have lost their lives or were injured, many of them children, in recent weeks alone, since the Syrian government forces unleashed a campaign of relentless and indiscriminate air and artillery attacks.

Yet the international community remains paralysed and riven by disagreements which have so far prevented any effective pressure being brought to bear on those responsible for such attacks.

Such indiscriminate attacks constitute war crimes and those responsible up and down the chain of command should know that they will be held accountable and that they will not be able to hide behind the excuse that they were obeying orders.

The UN Security Council should speed up this process by referring the situation in Syria to the Prosecutor of the International Criminal Court (ICC) in order to ensure that that the perpetrators of these war crimes and other crimes under international law are brought to justice.

“Members of the UN Security Council should set aside their political wrangling and put the victims first,” said Rovera.

“A referral to the ICC would send a powerful message to those responsible for crimes under international law that the time for impunity is over and would make all parties involved in the conflict - government forces as well as opposition forces - think twice before committing such violations”.

Opposition fighters have at times also used imprecise weapons (such as mortars) or even inherently indiscriminate weapons (such as home-made rockets) in populated residential areas, further endangering the civilian population.

As the conflict grinds on there is a danger that opposition fighters, if they succeed in their efforts to procure longer range weapons, will also step up indiscriminate attacks and other abuses which the international community has been unable and unwilling to stop when committed on such a large scale by government forces.

All Syrian armed opposition groups -  those belonging to the Free Syrian Army (FSA) and others - must make it clear to all those under their command that the fact that government forces violate IHL does not excuse similar grave violations on their part and that such violations will not be tolerated.