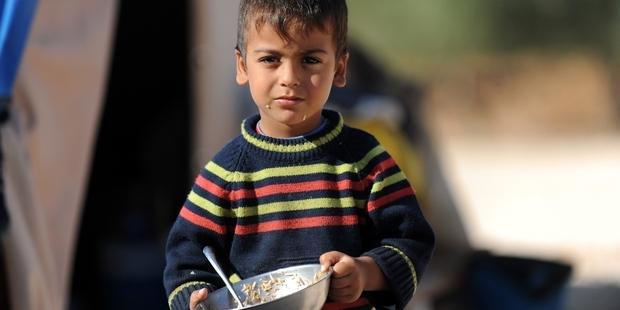 A Syrian boy looks on in a newly built refugee camp.(c)AFP/Getty Images

A few months earlier in June 2012, the European Council “strongly condemned the brutal violence and massacres of civilians and urged the Syrian regime to stop immediately its attacks against the civilian population”.

The human rights crisis in Syria is a major test for the EU in its own neighbourhood. In light of the recent announcement that it has been awarded the Nobel Peace Prize, the European Union and its member states have an opportunity to live up to this recognition by taking decisive action to ensure that refugees fleeing Syria are protected.

However, despite widespread condemnation, lofty talk and finger pointing, the, international community ・ including the European Union - has thus far failed to place any effective pressure on the parties to the conflict in Syria to end the large-scale human rights and humanitarian law violations.

Nineteen months after the initially peaceful pro-reform protests erupted and were met with brutal repression, spiralling into an internal armed conflict, the UN Security Council remains paralysed by the prospect of Russia and China’s vetos and the inaction of its other members.

And while the international community dithers, civilian casualities - many of them children - continue to mount.

Estimates indicate that well over 24,000 people have died since the crisis began. In addition, over one million people have become displaced from their homes within Syria.

More than 350,000 refugees have registered or are awaiting registration in Syria’s neighbouring countries- namely Turkey, Lebanon, Jordan and Iraq.

The UN predicts that by the end of the year 700,000 refugees will have fled to Syria’s neighbours. By contrast, the EU has only received 16,500 Syrian asylum seekers.

While Turkey, Lebanon, Jordan and Iraq have, on the whole, allowed large numbers of refugees to enter and remain on their territories, the sharply rising numbers crossing borders as the conflict worsens, makes it imperative for the international community to act decisively to share responsibility with neighbouring countries hosting them.

After all, if governments are really concerned about the fate of civillians in Syria, surely they are equally concerned for those forced to flee the country to seek safety. Assisting and protecting those who have managed to escape the bloodshed is the very least that the international community can do.

For this reason, Amnesty International is appealing to the European Union and its member states to take practical measures to assist those fleeing Syria.

Amnesty International is also calling on EU member states to share the responsibility and show solidarity by resettling refugees out of Syria, which is still hosting a large number of Iraqi and Palestinian refugees, as well as significant numbers of Somali, Afghan, Sudanese and Yemeni refugees.

Non-Iraqi refugees in particular face significantly increased exposure to protection risks during the current period of unrest due to their lack of documentation and/or visibility as foreigners.

The UN Refugee Agency is appealling to countries to provide resettlement places for these refugees and Amnesty International urges EU states to respond generously to this appeal.

European countries, as well as other donor countries, must also donate generously to the United Nations (UN) Syria Regional Response Plan. The UN, with its partners, has appealed for US$487.9 million to support the Syrian refugee operation. To date, the appeal is only 29 percent funded

The rapidly growing numbers of refugees and the onset of winter mean even harsher conditions for refugees in neighbouring countries.

The need to support the humanitarian appeal has become all the more urgent.