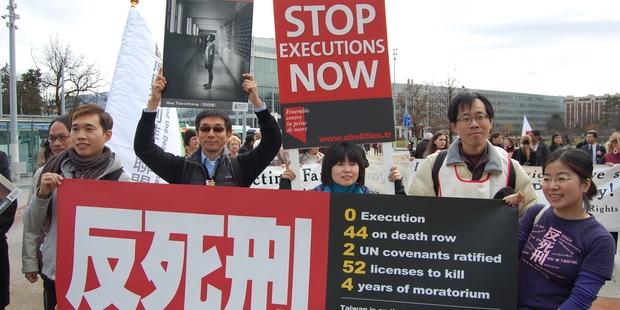 Taiwan must not succumb to public pressure and revert to using the death penalty, Amnesty International said as it urged an immediate moratorium on capital punishment as a first step towards its abolition.

Public pressure has been building on the government to carry out executions following the murder of a 10 year-old boy in the city of Tainan on 1 December 2012.

The alleged murderer is reported to have said he did not fear being executed, because of the Taiwanese government commitment to move away from using the death penalty.

On 6 December, following several large-scale demonstrations calling for the execution of the alleged murderer, the Ministry of Justice stated that “executions must be carried out” but that it had not set a timetable yet.

“This is a deplorable statement by the Ministry of Justice, and disappointing because of the government’s earlier stated commitment to move away from the death penalty,” said Roseann Rife, Head of East Asia for Amnesty International.

Taiwan has not executed anyone this year. Five people were executed in 2011 and 61 people remain on death row.

The government has agreed to implement the UN International Covenant on Civil and Political Rights, and repeatedly reaffirmed its intention to eventually abolish the death penalty.

“Regardless of how shocking it is, one individual incident cannot justify a return to the implementation of the death penalty. Carrying out executions now would represent a serious step backwards for the Taiwanese government,” said Rife.

Taiwan provides no procedure that would allow people on death row to seek a pardon or for the sentence to be commuted -  a right recognized by the International Covenant on Civil and Political Rights, which the Taiwanese parliament has voted to implement.
Family members are not informed about scheduled executions in advance.
They only find out when they are invited to collect the body from the mortuary.

In addition, serious fair trial concerns have marked the imposition of the death penalty in Taiwan.

In April, Taiwan's High Court quashed the convictions of three men sentenced to death over the murder of a couple 21 years ago, as it found that the convictions were based on unreliable confessions:

Amnesty International opposes the death penalty in all cases without exception regardless of the nature of the crime, the characteristics of the offender, or the method used by the state to carry out the execution.

Taiwan must not succumb to public pressure and revert to using the death penalty, Amnesty International said as it urged an immediate moratorium on capital punishment as a first step towards its abolition.