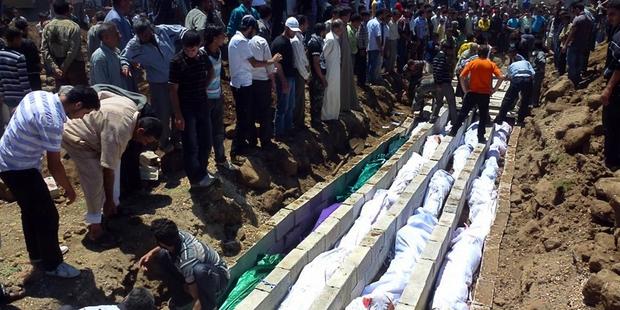 Syria's conflict has left an estimated 60,000 people dead, according to UN figures(C) Sniperphoto.co.uk/Demotix

Any future transitional government in Syria should make the protection of minority groups its top priority, Amnesty International said today as an international conference in the UK planning for the Syrian government’s possible collapse drew to a close.

Opposition leaders and worldwide Syria experts holding private talks in Sussex for a second day were urged to put human rights at the heart of all planning about the future of the country.

Minority groups including Alawite Muslims, the community of the al-Assad family, are facing an increased risk of human rights abuses by armed opposition forces.

"When the conflict eventually ends, a huge task will face those in power and it is vital that whoever is in charge puts human rights at the core of their policies and reforms," said Ann Harrison, Amnesty International's Middle East and North Africa Deputy Director.

"Chief among those is ensuring the safety and security of minorities, especially those suspected of supporting the former government."

There has been a recent rise in sectarian violence in Syria, particularly by those opposed to President Bashar al-Assad. Among those targeted have been Alawite, Druze and Shi’a Muslims, along with Christians.

"Urgent action is needed to stop sectarian attacks and to ensure that the legacy of repression does not shape the future," said Harrison.

“Impunity for crimes under international law must not be allowed to fester and tarnish the prospects for a new Syria where the rights of all are fully respected.”

The Sussex conference comes as a peaceful resolution of the conflict in Syria seems ever more distant. Opposition forces are continuing to make territorial gains, though the towns and villages they hold are then frequently heavily bombed and shelled by Syrian government forces.

Syria's future leaders will be tasked with rebuilding a country ravaged by a bloody conflict that has so far left at least 60,000 people dead, according to the UN. Civilians are continuing to bear the brunt of the violence, with dozens reportedly killed on a daily basis.

According to the UN, more than 2 million others are estimated to have been displaced inside the country, while more than 600,000 refugees have fled, mostly into neighbouring countries.

"Among the most urgent tasks for any new government would be to ensure that anyone in Syria in need of emergency humanitarian aid receives it without delay," said Harrison.

Amnesty International said the onus was also on the international community to ease the humanitarian crisis in Syria ? both before and after any possible transition.

Housing, food, water, sanitation and health care, must all be urgently provided for, and the international community must help shoulder the burden.

The UN and other international agencies are urgently seeking financial contributions to aid people both within Syria and those who have fled.

"Countries hosting refugees from Syria should not forcibly return them until the security and human rights situation there has improved enough to allow for safe, dignified and sustainable return,” said Harrison.

Amnesty International called on other governments to express solidarity with Syria’s neighbouring countries currently hosting most of the refugees, and to take meaningful steps to share the responsibility.

The Syrian and international figures discussing the country's future have also been urged to commit to combating discrimination and violence, particularly against women, should they be in power in the future.

"We have seen all too often in recent years how women's rights fall to the bottom of the agenda under transitional governments -- something the post-conflict authorities in Syria must prevent," said Harrison

"Breaking with the legacy of more than 40 years of entrenched patterns of human rights violations will require courage, political will and effective measures.

"But after decades of stifling repression and months of devastating conflict, Syrians want and deserve a state based on respect for human rights and the rule of law."