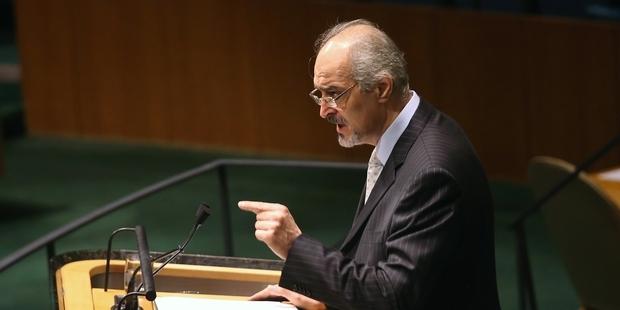 Syria's Ambassador to the United Nations addresses the General Assembly before the vote on the resolution. (C) Getty Images

Todays United Nations General Assembly (UNGA) resolution on Syria is a positive step but it does little to address the immense ongoing human rights and humanitarian crisis in the country.

The non-binding resolution--which 107 states voted to adopt--encourages, among other things, the UN Security Council to "consider appropriate measures" that would ensure accountability for the ongoing violence and human rights violations in Syria. Russia was among the 12 countries who voted against the measure, while 59 abstained.

The resolution contains the UNGA's strongest call yet for independent and impartial investigations of all suspected violations of human rights and international humanitarian law since the outbreak of the Syrian uprising in March 2011. Russia and China have three times vetoed a UN Security Council resolution on the situation in Syria.

"Tens of thousands of people have died and millions have been uprooted by the ongoing armed conflict in Syria, but it has taken the United Nations more than two years to even begin to address the grave human rights abuses being committed there," said José Luis Díaz, Amnesty International's UN Representative in New York.

"A majority of the world's governments have now spoken out, and their endorsement for clear action on Syria must build pressure for the UN Security Council to take up the issue again and press for binding action to bring accountability for abuses.

"This includes referring the situation to the International Criminal Court to bring to justice those on all sides who are responsible for war crimes, crimes against humanity and other crimes under international law."

Qatar, Saudi Arabia, the UK and France were among the countries that introduced today’s General Assembly resolution, which condemned all violence amid the Syrian conflict, irrespective of who was responsible. It called upon all parties to bring an immediate end to hostilities and to comply strictly with their obligations under international law, including international humanitarian law. And it supported a transition of power to help end the current crisis.

The resolution stressed the importance of ending impunity and holding to account all those responsible for serious violations or abuses of international human rights and humanitarian law, including those that may amount to war crimes and crimes against humanity. It also called for the Independent International Commission of Inquiry on Syria to be given an extended mandate and greater access to carry out their work.

Since the initial reports of serious human rights violations in Syria in March 2011, Amnesty International has made consistent calls for the international community to take meaningful steps to ensure those responsible are held to account for crimes under international law and other abuses, and for victims to receive reparations.

Activists in the crossfire

The organization has also repeatedly called for an end to President Bashar al-Assad’s crackdown on dissent in the country amid the conflict, which has led to the detention of tens of thousands of people for exercising their rights to freedom of expression and assembly--with many of them held incommunicado or put at risk of torture or other ill-treatment.

Among those targeted have been a large number of human rights activists, a number of whom are facing trial at the recently established Anti-Terrorism Court, where proceedings appear to fall far short of international standards of fair trial.

On 19 May, the Anti-Terrorism court is due to prosecute five independent activists from the Syrian Centre for Media and Freedom of Expression who were arrested in a raid on the centre in February 2012 and have been detained arbitrarily and in conditions amounting to enforced disappearance since then.

human rights and media activities in response to the ongoing conflict in Syria.

"The pending trial of Mazen Darwish and his fellow human rights activists on terrorism-related charges is indicative of how the respect for human rights has been trampled amid the ongoing armed conflict in Syria," said José Luis Díaz.

"The international community--in particular Syria's allies--must pressure the al-Assad government into halting this persecution of human rights defenders and ensure the release of all prisoners of conscience still being held solely for exercising their rights to freedom of expression or assembly."

Bashar al-Assad's government has granted several general prisoner amnesties since the armed conflict began, but Amnesty International has been following the cases of dozens of prisoners of conscience who have not been affected by the measures and remain behind bars in what are believed to be terrible conditions.