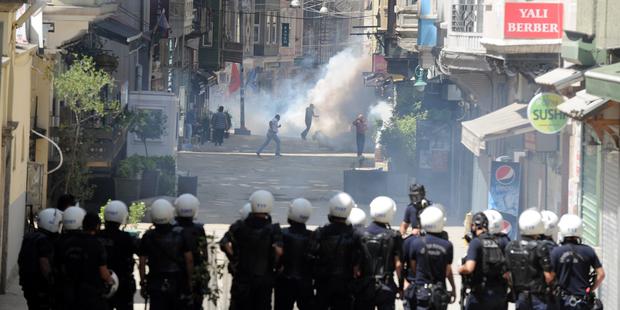 The inappropriate use of tear gas by police has been the most devastating on the safety of demonstrators in Istanbul. © BULENT KILIC/AFP/Getty Images

Urgent steps must be taken by the Turkish authorities to prevent further deaths and injuries and allow protestors access to their fundamental rights, as well as ensuring the security of all members of the public, Amnesty International said.

Amnesty International kept its office, which is close to the Taksim area, open as a safe haven for protestors escaping police violence throughout the night. 20 doctors are currently in the office and treating injured protestors. Other civil society organizations have taken similar actions.

Excessive use of force by police officers can be routine in Turkey but the excessively heavy-handed response to the entirely peaceful protests in Taksim has been truly disgraceful. It has hugely inflamed the situation on the streets of Istanbul where scores of people have been injured.

Amnesty International observers at the protests witnessed the use of water cannon against peaceful protestors as well as those throwing stones at police.

The testimonies of protestors, lawyers and medical professionals at the scene and video evidence confirm this as a widespread tactic employed by the police at demonstrations continuing across central Istanbul.

The inappropriate use of tear gas by police has been the most devastating on the safety of demonstrators, causing an unknown number of injuries, including serious head injuries when the canisters hit protestors. Hundreds of empty tear gas canisters remain on the ground in areas where demonstrations are taking place.

On a number of occasions police were seen deliberately targeting individual protestors with tear gas canisters. A number of protestors are thought to have lost their sight as a result of the use of tear gas at close range.

Tear gas has also been used in confined areas where it is especially dangerous to health. In some cases tear gas was fired directly into homes and businesses that had opened their doors to fleeing protestors. Reports also state that tear gas was fired close to the entrance of Taksim Emergency Hospital, close to the scene of many protests.

Amnesty International has received reports that some protestors detained last night were held for up to 12 hours in hot and overcrowded police vehicles without access to food, water or toilet facilities. The organization has received 49 complaints from individuals alleging ill-treatment by police against while in detention.

Amnesty International has also received information that injured demonstrators in detention and on the streets have been prevented from accessing appropriate medical care.

Lawyers told Amnesty International that injured protestors were apprehended by police and taken to police stations when they needed hospital treatment. Once in detention they could not access appropriate medical care.

It is clear that the use of force by police is being driven not by the need to respond to violence - of which there has been very little on the part of protesters - but by a desire to prevent and discourage protest of any kind.

Attempts by the Istanbul Medical Chamber to establish temporary medical facilities to treat injured protestors on the street have been hampered by the constant use of tear gas by the police in areas where demonstrations are taking place. Amnesty International was also told that police security measures have prevented many injured protestors from accessing the nearby Taksim Emergency Hospital.

Reacting to the demands for medical treatment nearby private hospitals have opened their doors to injured protestors and calls have gone out to doctors to report for work.

Despite the growing crisis Turkish authorities are showing no sign that they will change course or take the required steps to ensure the security of the demonstrators and of members of the public in general.

Amnesty International has launched an urgent call to its activists across the world to take action on Turkey. Amnesty International is calling on Turkey’s Prime Minister, Recep Tayyip Erdogan to step in immediately and stop police violence. Ill-treatment on arrest and in detention must end, access to medical care must be ensured. An independent and effective investigation into the violence must be carried out together with an urgent display of attrition from the government to diffuse the crisis.