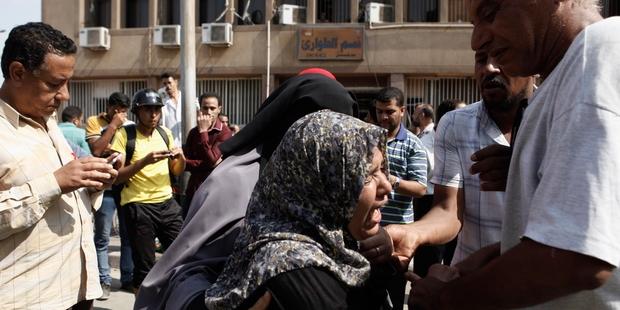 At least 88 people have lost their lives in protests and political violence in Egypt.(C) Ed Giles/Getty Images

Evidence gathered by Amnesty International suggests that the security forces have used excessive force against supporters of deposed President Mohamed Morsi. Since last Friday at least 88 people have lost their lives in protests and political violence, including three members of the security forces, with around 1,500 wounded.

At least 51 Morsi supporters were killed yesterday during clashes outside the Republican guard headquarters.

“Despite claims by the military that protesters attacked first during clashes on Monday and that no women and children were injured, first hand accounts collected by Amnesty International paint a very different picture. Even if some protesters used violence, the response was disproportionate and led to the loss of life and injury among peaceful protesters,” said Hassiba Hadj Sahraoui, Deputy Director of Amnesty International’s Middle East and North Africa Programme.

However, accounts collected from eyewitnesses contradict this version of events. Amnesty International has visited morgues, hospitals and sites of violence in Cairo and Alexandria to gather testimonies from injured protesters and relatives of victims. Its findings suggest the use of disproportionate force by the security forces, including intentional lethal force. Many of those killed and injured had been shot in the head and upper body with shotgun pellets and live ammunition.

“The Egyptian authorities must end the military and police’s use of grossly disproportionate force. Even when individual protesters use violence, the army must respond proportionately, without killing and injuring those not endangering the lives of the security forces or others. They must ensure an investigation which all sides see as independent and impartial is promptly conducted to ensure any alleged army abuses are not covered up”.

“The Egyptian authorities must also ensure that proper autopsy and medical reports are issued to facilitate thorough investigations and ensure access to justice and reparations.”

Amnesty International’s fears of further bloodshed are heightened by statements by Muslim Brotherhood leaders vowing to continue protesting until the former President is reinstated, calling on their supporters to “rise up” and “resist”, despite the ongoing deaths and injuries.

“As politicians squabble over who started the violence, it’s clear that unless the security forces are reined-in and clear orders given on the use of force we’re looking at a recipe for disaster.”

A woman in her forties who was wounded on Monday said the violence began at as she finished prayers beside a tent housing women and children.

“I saw men running towards us, then the teargas started falling. I did not know what to do or where to take the children. I couldn’t go back to the tents because we would suffocate, and I didn’t know where to run because of the shooting…There were shots and teargas coming from all directions…There were men lying on the ground in pools of blood in front of me, I just stayed there under the tree praying…I thought that was it,” she said. Eventually, she managed to escape down a side street.

Amnesty International interviewed several other women who had shotgun  pellet wounds in the upper body including the back, and a child at a Cairo hospital with wounds in his head, face and legs.

The deaths yesterday followed shootings on 5 July, when security forces shot dead four people during protests in front of the Republican Guard.

The organization also found that security forces had intervened too late or not at all during clashes between pro and anti Morsi supporters in Cairo and Alexandria on 5 July leading to a loss of life on both sides.

At least eight people died during clashes between rival camps that lasted around five hours in Tahrir Square and the district of al-Manial in Cairo on Friday, with the security forces absent from the scene.

In Alexandria on Friday, at least 17 were killed in the Sidi Gaber area. Security forces arrived on the scene after some people had already been killed. Mohamed Badr al-Din, a local resident, was stabbed and thrown from a roof by Morsi supporters.

Local residents said calls for the police to intervene were ignored.

“It is the responsibility of the security forces to maintain security and protect lives. However, instead of preventing further bloodshed they appear to have contributed to it by using excessive force and ignoring the people’s pleas for help,” Hassiba Hadj Sahraoui said. “Those who violently attack their political opponents should be held to account, whatever their political affiliation.”